Skip to main content
SPRING CYBER EVENT STARTS NOW: And it's a really BIG deal! Up to 88% off through 5/24>
The Wedge of Truth : Splitting the Foundations of Naturalism
By: Phillip E. Johnson
Stock No: WW23954 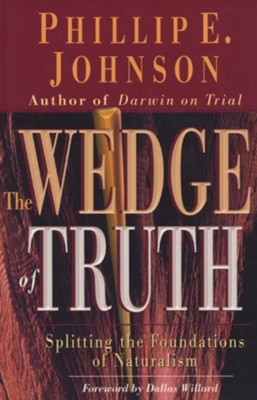 The Wedge of Truth : Splitting the Foundations of Naturalism

▼▲
In order to split the foundations of naturalism this book analyzes the latest debates about science and evolution. He incisively pinpoints philosophical assumptions and counters the objections to intelligent design raised by its most recent critics. Johnson prophetically concludes that the walls of naturalism will fall and that the Christian gospel must play a vital role in building a new foundation for thinking - not just about science and religion but about everything that gives human life hope and meaning.

▼▲
A 2001 ECPA Gold Medallion Award winner! A 2001 Christianity Today Award of Merit winner! Science is the supreme authority in our culture. If there is a dispute, science arbitrates it. If a law is to be passed, science must ratify it. If truth is to be taught, science must approve it. And when science is ignored, stroms of protest are heard in the media, in the university--even in local coffee shops. Yet a society ruled by science (and the naturalistic philosophy that undergirds much of it) faces major problems. Science speaks so authoritatively in our culture that many are tempted to use its clout to back claims that go beyond the available evidence. How can we spot when such ideological slight of hand has taken place? More important, while we may learn a great deal from science, it does not offer us unlimited knowledge. In fact, most scientists readily acknowledge that science cannot provide answers to questions of ultimate purpose or meaning. So to what authority will we turn for these? The deficiencies in science and the philosophy (naturalism) that undergirds it call for a cognitive revolution--a fundamental change in our thinking habits. And it all begins with a wedge of truth. This wedge of truth does not "wedge out" a necessary foundation of rational thought. But it does "wedge in" the much-needed acknowledgment that reason encompasses more than mere scientific investigation. Phillip E. Johnson argues compellingly for an understanding of reason that brings scientific certainty back into relational balance with philosophical inquiry and religious faith. Applying his wedge of truth, Johnson analyzes the latest debates between science and religion played out in our media, our universities and society-at-large. He looks to thinkers such as Newbigin, Polanyi and Pascal to lay a foundation for our seeing the universe in a totally different way. And from that base he then considers the educational programs and research agendas that should be undertaken--and have already begun in some earnest--during this new century. In the end, Johnson prophetically concludes that the walls of naturalism will fall and that the Christian gospel must play a vital role in building a new foundation fro thinking--not just about science and religion but about everyhting that gives human life hopeand meaning.

▼▲
Phillip E. Johnson taught law for more than thirty years at the University of California--Berkeley where he is professor emeritus. He is recognized as a leading spokesman for the intelligent design movement, and is the author of many books, including and Dallas Willard (1935-2013) was a professor in the School of Philosophy at the University of Southern California in Los Angeles for over 40 years. A highly influential author and teacher, Willard was as celebrated for his enduring writings on spiritual formation as he was for his scholarship. His books include ( Book of the Year in 1998), and others. His books have received numerous Annual Book Awards and other recognitions. Willard served on the boards of the C.S. Lewis Foundation and Biola University, and was a member of numerous evaluation committees for the Western Association of Schools and Colleges. He received bachelors degrees from both Tennessee Temple College and Baylor University and a graduate degree at Baylor University, as well as a PhD from the University of Wisconsin in Philosophy and the History of Science.

▼▲
I'm the author/artist and I want to review The Wedge of Truth : Splitting the Foundations of Naturalism.
Back
Back