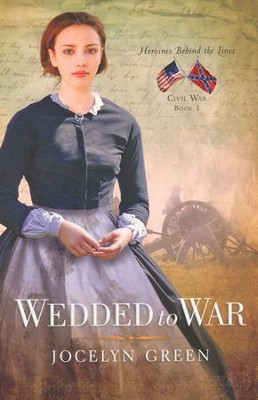 Wedded to War, Heroines Behind the Lines Series #1

Tending to the army's sick and wounded meant leading a life her mother does not understand and giving up a handsome and approved suitor. Yet Charlotte chooses a life of service over privilege, just as her childhood friend had done when he became a military doctor. She soon discovers that she's combatting more than just the rebellion by becoming a nurse. Will the two men who love her simply stand by and watch as she fights her own battles? Or will their desire for her wage war on her desire to serve God?

When war erupted, she gave up a life of privilege for a life of significance.

Tending to the army’s sick and wounded meant leading a life her mother does not understand and giving up a handsome and approved suitor. Yet Charlotte chooses a life of service over privilege, just as her childhood friend had done when he became a military doctor. She soon discovers that she’s combatting more than just the rebellion by becoming a nurse.

Will the two men who love her simply stand by and watch as she fights her own battles? Or will their desire for her wage war on her desire to serve God?

Wedded to War is a work of fiction, but the story is inspired by the true life of Civil War nurse Georgeanna Woolsey. Woolsey’s letters and journals, written over 150 years ago, offer a thorough look at what pioneering nurses endured. This is the first in the series Heroines Behind the Lines: Civil War, a collection of novels that highlights the crucial contributions made by women during times of war.

▼▲
JOCELYN GREEN is an award-winning author who inspires faith and courage in her readers through both fiction and nonfiction. A former military wife herself, she authored Faith Deployed: Daily Encouragement for Military Wives and co-authored The 5 Love Languages Military Edition with Dr. Gary Chapman. Her novels, inspired by real heroines on American's home front, are marked by their historical integrity and gritty inspiration. The books in the Heroines Behind the Lines Civil War series have been honored with gold and silver medals from the Military Writer's Society of America. Wedded to War was a Christy Award finalist in two categories. Jocelyn graduated from Taylor University in Upland, Indiana, with a B.A. in English, concentration in writing. She is an active member of the Christian Authors Network, the Advanced Writers and Speakers Association, American Christian Fiction Writers, and the Military Writers Society of America.Jocelyn lives with her husband Rob and two small children in Cedar Falls, Iowa. Visit her at www.jocelyngreen.com.

▼▲
In Jocelyn Green's historical novel Wedded to War, field nurse Charlotte Waverly must decide if it is possible to be faithful to a country she owes her allegiance to while also pursuing a love relationship that has captured her heart.

Charlotte Waverly, born into wealthy society, answers the call for nurse candidates. Recommended by Dr. Elizabeth Blackwell but rebuffed by Dorothea Dix, the director of the female nurses, Charlotte must find her own way into nursing. Finally trained as a hospital matron, she travels to a Washington City hospital, where she is exposed to hands-on nursing. Eventually, she serves on a hospital transport ship.

An intriguing cast of characters cross paths with Charlotte and also with each other in an interwoven plotline. Phineas Hastings, Charlotte's suitor, cloaks his unsuitable former social level. Caleb Lansing, a childhood friend who has disappeared from her life, is in Charlotte's thoughts, along with her hateful letter that separated them. Edward Goodrich, who responds to Charlotte's call for a chaplain to the troops, falls in love with her. And on a path that eventually intersects with Charlotte is the captivating character of Ruby O'Flattery, an Irish immigrant, whose husband has enlisted, leaving her to find more and more desperate ways to support herself while fighting to maintain her identity as "an honest and decent woman."

This is a good story with several unexpected plot twists, even though the ending is predictable. My favorite scene is the confrontation between Dorothea Dix and Charlotte. The issue of the antagonism of men, medical or otherwise, to female nurses is displayed in several forceful scenes. The disapproval of women in general is also represented.

I deeply appreciate the author's handling of the spiritual struggles of various characters. Even the chaplain struggles for answers when confronted with the realities of war. The questions are real, the struggles are painful, and the resolutions are satisfying and rational. - Lynn Brown, www.ChristianBookPreviews.com

Wow, what an amazing story based on real women in history. When I finished the last page of this book I was changed, much like how I felt after watching Dances with Wolves and Gone with the Wind. Both movies opened my eyes to things I never thought of before or knew existed and it changed how I viewed periods of American history. If only our history book in school was this exciting and memorable. Grin! This is a great book club pick as there is so much to talk about in it. This book is to be experienced and then shared with friends. I highly recommend it.
Reviewed by: Nora St.Laurent The Book Club Network

"Fascinating, dramatic, and romantic, Wedded to War by Jocelyn Green sheds light on the harrowing world of Civil War nursing through the eyes of a delightful heroine. Detailed research and a powerful message about mercy make this story a keeper. This is the first in the Heroines Behind the Lines Civil War series, and I'm much anticipating the second book!" - Review by Sarah Sundin, SarahSundin.blogspot.com, 7/12/12

▼▲
I'm the author/artist and I want to review Wedded to War, Heroines Behind the Lines Series #1.
Back
Back