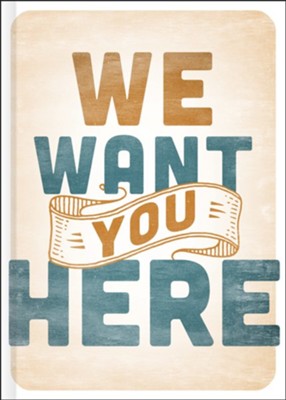 We Want You Here

▼▲
Let newcomers in your church know that they're welcome! In this warm-hearted book, Rainer facilitates the conversation that every pastor would have if given the opportunity. It tells visitors that you want to get to know them, that you believe in strengthening families, and that you're inviting them to join you in making a difference. 80 pages, hardcover from B&H.

The message is basic but profound. We want guests to know they are welcome to the church. This book is a gift to guests to communicate that very message.

Bestselling author Thom S. Rainer (I Am a Church Member, Autopsy of a Deceased Church) has created a tool for churches to become more hospitable through a brief, welcoming book that introduces the ministry of the local church to guests. We Want You Here is a clear and instructive message to be given to church guests. Rainer facilitates the follow up conversation that every pastor would have, if they had the opportunity. By giving away the book to guests, they are encouraged, in a non-intrusive manner, to continue to reflect on the decision to visit their church.

Those churches who share We Want You Here will be able to tell their guests:

▼▲
I'm the author/artist and I want to review We Want You Here.
Back
Back