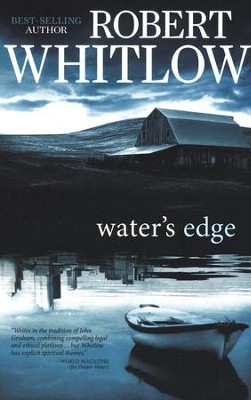 Ambitious young attorney Tom Crane is about to become a partner in a big-city law firm. One final matter has to be cleared from his docket--the closing of his deceased father's law practice in the small town of Bethel. Killed in a tragic boating accident, John Crane didn't leave his son anything except the hassle of a bankrupt estate.

Then, within twenty-four hours, Tom loses his job, his girlfriend, and his cat. Job didn't have it much worse.

Returning to Bethel with his pride ground to powder, Tom's plan to quietly shut down his father's practice and slink out of town runs into an unexpected roadblock - two million dollars of unclaimed money stashed in a secret bank account. Tom follows the money into a tangled web of lies, theft, and off-shore financial transactions manipulated by powerful men who will do anything to stop him from discovering the truth.

A tangled web of lies, theft, and betrayal—one lawyer must determine if that is all his late father left him.

Ambitious young attorney Tom Crane is about to become a partner in a high-profile Atlanta law firm. But first he must clear one final matter from his docket: the closing of his deceased father’s law practice in his hometown of Bethel, Georgia. Killed in a mysterious boating accident, John Crane didn’t appear to leave his son anything except the hassle of wrapping up loose ends.

But instead of celebrating his promotion, Tom finds himself packing up his office, having suddenly been "consolidated." To add insult to injury, that same night his girlfriend breaks up with him . . . by letter.

Returning to Bethel with no sense of his future and no faith to fall back on, Tom just wants to settle his father’s affairs and get back to Atlanta. But then he runs into an unexpected roadblock—two million dollars of unclaimed money stashed in a secret bank account. And evidence that his father’s death may not have been accidental. Worse still, a trail of data suggests his father played a role in an international fraud operation.

Along the way, he meets a woman who is as beguiling as she is beautiful. And her interest in the outcome of the case is just as high as his. She challenges Tom’s assumptions . . . and his faith. Now he must decide whom he can trust—and how far a father’s love can reach.

▼▲
A great mystery that will keep you interested until the end. The characters are well thought out and the storyline believable. Fans who enjoyed Whitlows other works will also like this one. - 4 stars, Romantic Times

"This is a solid, suspenseful thriller with an overt but not overpowering Christian theme, for in solving the mystery surrounding his father's death, Tom also confronts his own situation and faith. The religious theme is subtly handled and won't put off readers who prefer their legal thrillers to be nondenominational. For those who prefer a spiritual element in their fiction, this one deserves a hearty thumbs-up."

▼▲
Christy Awardwinning Whitlow (Greater Love) is a lawyer who knows his profession, as his newest legal thriller shows. Tom Crane is a hotshot young Atlanta lawyer who thinks he's about to become partner. Instead he gets pink-slipped, and dumped by his girlfriend, giving him lots of time to close out the smalltown law practice of his late father, who died in a boating accident. Circumstances slowly suggest that his father's death was not an accident; a second man who died in the boating accident has a beautiful daughter interested in the truth behind her father's death, and she's also an evangelical Christian. Characterizations are plausible, the mystery develops at a good pace, and the villain's a surprise. The Christian elements are heavy but not sappy; their centrality in the story will limit the potential audience to those already in sympathy with Christian fiction requirements. It's welcome relief nonetheless to have Christian fiction that doesn't center on romance, and Whitlow is certainly a competent writer. (Aug.) Copyright 2011 Reed Business Information.

▼▲
Life, death. Right, wrong. Love, hate. It all gets tangled in Robert Whitlow's Water's Edge. Tom Crane has the perfect life: a hot girlfriend, an amazing job, a dog and cat, and a nice apartment. Life is fantastic until one day, through a series of bizarre events, his entire world comes crashing down. Now all Tom has left is his faithful old dog and his father's law firm, which Tom is determined to shut down. As Tom ventures to close the firm, he discovers some important and mysterious files are missing many of their key documents and records. Before he can find out the background of these files from his lawyer dad, Tom's father dies an untimely death. Now it is up to Tom, with some help from a young companion Rose, to discover the secrets beneath the water's edge.

Whitlow does an outstanding job bringing his characters to life through dialogue. Not only can readers hear the happy times of gratitude, but they can also feel the situations of despair. He knows how to draw readers in and make them think things are going to be okay, only suddenly to throw an unexpected curve.

By God's calling and help from a buddy named Elias, Tom soon realizes a life without Christ is no life at all. Now it's time for the real test of faith as Tom discovers his father's hidden secrets and nearly two million dollars. On top of it all, Tom finds himself falling for a woman who already belongs to another man. Now Tom must decide whether he is going to follow God and the plans He has for him or if he is going to take his fate into his own hands.

Exodus 20: 17 says, "You shall not covet your neighbor's house. You shall not covet your neighbor's wife." Although Tom has a new found faith in Christ, there are some things about his personality that do not align with Christian values. For instance, when Tiffany shows interest in Tom as more than just a friend of her husband's, Tom encourages her affections instead of rejecting them. Later in the book, it is upsetting when Tom devises his own suicide mission. Tom is a complex character who keeps readers guessing to the very end about what his next move is going to be.

Water's Edge gets off to a great start, but then it hits a plotting quagmire. Many of the scenes are repetitive or padded with superfluous explanations and scenic descriptions. Additionally, it was a stretch to believe that Tom would read a verse from the Bible and suddenly feel ready to accept Jesus as his Lord. Better lead up and preparation were needed for that. The book could have benefited from some intensive editing; the plot concept is interesting and the characters are well developed, but the pacing becomes very slow. For readers who don't want to rush through a mystery, this story is long, detailed, and expansive. Anna Williams, www.ChristianBookPreviews.com

“This is a solid, suspenseful thriller with an overt but not overpowering Christian theme, for in solving the mystery surrounding his father’s death, Tom also confronts his own situation and faith. The religious theme is subtly handled and won’t put off readers who prefer their legal thrillers to be nondenominational. For those who prefer a spiritual element in their fiction, this one deserves a hearty thumbs-up.” -- Booklist

“Christy Award–winning Whitlow (Greater Love) is a lawyer who knows his profession, as his newest legal thriller shows. ' -- Publishers Weekly

“A great mystery that will keep you interested until the end.' -- Romantic Times

▼▲
I'm the author/artist and I want to review Water's Edge.
Back
Back