Warfare For Your Marriage: Identifying the Battle for your Heart, Home, and Family
By: Richard Ing 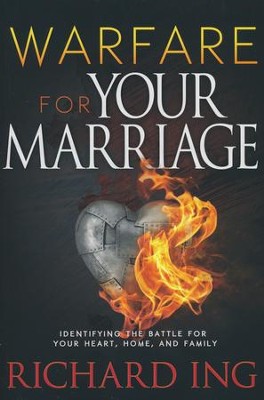 Warfare For Your Marriage: Identifying the Battle for your Heart, Home, and Family

Married for nearly fifty years, Richard Ing has counseled hundreds of couples and is also an expert at spiritual warfare. He has identified the ways in which Satan and his demons attack marriage through struggles in communication, intimacy, rejection, and the baggage from our past. This book exposes the evil spirits Satan uses to destroy marriages and how we can be delivered from them.

▼▲
A Spiritual Battle on the Home Front
The divorce rate in America is around 52 percent. Nearly half of all children are born out of wedlock. Something is very wrong. The Bible declares that illegitimacy brings a curse upon a family for ten generations. If this is true, American families are engaged in a spiritual battle and don’t even know it.
Married for nearly fifty years, Richard Ing has counseled hundreds of couples and is also an expert on spiritual warfare. He has identified the ways in which Satan and his demons attack marriage through struggles in communication, intimacy, rejection, and the baggage from our past.
This is not a book on Christian psychology and counseling but rather a direct counterattack against the kingdom of darkness and the lusts of the flesh. It cuts to the chase by identifying the true source of most marital conflicts and explores how your attitudes impact all your relationships, both in and outside of marriage. It exposes the evil spirits Satan uses to destroy marriages and equips you to be delivered from them.

▼▲
Richard Ing has been married to his first sweetheart, Beatrice, for over fifty years. They have four children. Two are attorneys and two work for the State of Hawaii. Pastor Ing was born and raised in Hawaii, where he resides today. He was a civil engineer before graduating from Hastings College of the Law in San Francisco. He recently retired from law practice after forty years. He also owned several businesses, including a real estate firm, collection agency, travel agency, and newspaper.
Pastor Ing was an Episcopalian and a Baptist in his youth but backslid when he embraced the fraternity life in college. At the age of thirty-five, he began to seek God again, but a book entitled All Paths Lead to God led him to try many different religions, although he continued to pray to Jesus Christ. When he was forty-five years old, he and his wife were meditating in a Shinto temple when the head priestess tapped him on the shoulder and asked if he "used to go to a church with the cross—Jesus God." She claimed that Jesus appeared to her moments earlier and told her that Mr. Ing and his wife belonged to Him and to send them to Him right away because time is short. That very night, Mr. and Mrs. Ing went to pray for a heart patient who was going to have open-heart surgery the next morning. Two days later, they received a phone call informing them that a miracle had occurred because the next morning the presurgery exam found that her heart was perfect!
Pastor Ing became born again in a deliverance ministry a few months later. He threw himself wholeheartedly into reading the Bible, serving, and praying, and became an elder in eight months. Two years later, he had a vision in which he was in a company of soldiers dressed in combat uniform and packed into a small building. He recognized it as a training hall he sat in when he took basic training in the U.S. Army. He saw himself walk down the steep steps to the front where he stood behind a wooden podium facing the troops. He then heard a voice say, "Son, I want you to teach My army!"
When he began teaching spiritual warfare and deliverance in Fiji, Vanuatu, and other countries, people would often see angels and white horses. Pastor Ing has given many small (two to three hundred attending) crusade meetings in the remote provinces of the Philippines, where God would deliver and heal many and thousands came to the Lord.
In 1998, as he was teaching at a Bible college in one of the northernmost provinces of the Philippines, the entire class suddenly fell to the ground and one of his workers had a vision of a huge rice field stretching out as far as the eyes could see. The stalks were so full of grain that they almost touched the ground, but they were still green. The rice then turned into people in white robes. The worker opened her eyes and saw a huge angel standing on the stage with a scroll in his hands. He announced that a great revival was coming to that area. Many smaller angels were flying under the ceiling.
Dr. Ing found out later that many have prophesied that the last and greatest revival of all time would start in the northern provinces of the Philippines. Three years later, Dr. Ing revisited the Bible college and his wife and three other members saw the same angel with two smaller angels on his right and two on his left. Since then, Dr. Ing has concentrated on the Philippines and made more than forty-five trips there.
He is the senior pastor of Light of the World Missions in Hawaii and in the Philippines. He holds a Doctor of Ministry degree besides a juris doctorate and bachelor of sciences degree, and is the vice president of New Covenant International Seminary and Bible College, with over two hundred affiliated Bible colleges around the world. Dr. Ing operates a Bible college, Mission House, and Vocational Training Center in the Philippines, along with four churches. He has lectured on spiritual warfare and inner healing multiple times in Fiji, Vanuatu, India, mainland China, Hong Kong, Singapore, Sarawak, Bulgaria, Philippines, Guam, Mexico, Switzerland, and on the U.S. mainland. He also lectures on house church restoration for the end times. He will be the first to tell you that he is unworthy, having been a Peter for so long, and only through God’s grace and mercy has he been given the privilege of seeing and experiencing the power of God in action.

▼▲
I'm the author/artist and I want to review Warfare For Your Marriage: Identifying the Battle for your Heart, Home, and Family.
Back
×
Back
×