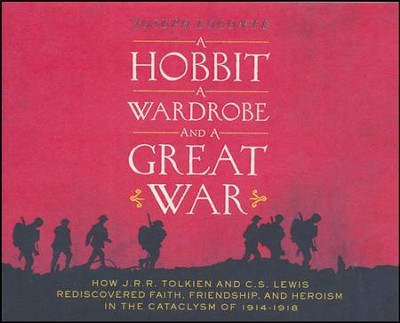 A Hobbit, a Wardrobe, and a Great War: How J. R. R. Tolkien and C. S. Lewis Rediscovered Faith, Friendship, and Heroism in the Cataclysm of 1914-1918 - unabridged audio book on CD

▼▲
The First World War laid waste to a continent and altered the political and religious landscape of the West forever. Some survivors became disillusioned and lost their faith in God, while others like Tolkien and Lewis had their spiritual imaginations reignited. How did trench warfare actually shape their writing?

The untold story of how the First World War shaped the lives, faith, and writings of J. R. R. Tolkien and C. S. Lewis

The First World War laid waste to a continent and permanently altered the political and religious landscape of the West. For a generation of men and women, it brought the end of innocence—and the end of faith. Yet for J. R. R. Tolkien and C. S. Lewis, the Great War deepened their spiritual quest. Both men served as soldiers on the Western Front, survived the trenches, and used the experience of that conflict to ignite their Christian imagination. Had there been no Great War, there would have been no Hobbit, no Lord of the Rings, no Narnia, and perhaps no conversion to Christianity by C. S. Lewis.

Unlike a generation of young writers who lost faith in the God of the Bible, Tolkien and Lewis produced epic stories infused with the themes of guilt and grace, sorrow and consolation. Giving an unabashedly Christian vision of hope in a world tortured by doubt and disillusionment, the two writers created works that changed the course of literature and shaped the faith of millions. This is the first audiobook to explore their work in light of the spiritual crisis sparked by the conflict.

▼▲
Joseph Loconte is an Associate Professor of History at the King’s College in New York City, where he teaches courses on Western Civilization and American Foreign Policy. His previous titles include God, Locke, and Liberty: The Struggle for Religious Freedom in the West (Lexington, 2014) and The Searchers: A Quest for Faith in the Valley of Doubt (Thomas Nelson, 2012). His commentary on international human rights and religious freedom has appeared in the nation’s leading media outlets, including the New York Times, the Wall Street Journal, the Washington Post, the New Republic, the Weekly Standard, and National Public Radio. He is a regular contributor to the Huffington Post and the London-based Standpoint magazine. Loconte serves as a senior fellow at the Trinity Forum and as an affiliated scholar at the John Jay Institute. A native of Brooklyn, New York, he divides his time between New York City and Washington DC.

▼▲
I'm the author/artist and I want to review A Hobbit, a Wardrobe, and a Great War: How J. R. R. Tolkien and C. S. Lewis Rediscovered Faith, Friendship, and Heroism in the Cataclysm of 1914-1918 - unabridged audio book on CD.
Back
Back