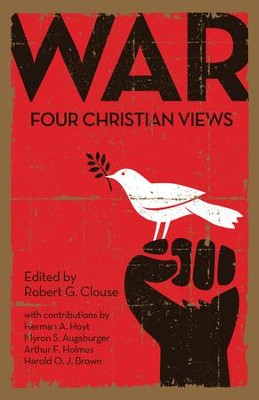 ▼▲
"This brief survey reveals several reactions on the part of Christians toward war. These can be categorized as Christian pacifism or non resistance, the just war and the crusade....Because many readers of this book may be called upon to serve in the military if there is another large-scale conflict, it is important to try to arrive at some conclusion about war. Each of the interpretations presented here have devout evangelical Christian adherents.

"It is my hope that these essays and discussions will help readers to formulate their own views about war....armed conflict may be the most pressing problem that global society faces today. Those who follow Jesus Christ must seek to understand his will in relationship to matters of war and peace." -from the introduction by Robert G. Clouse

Each viewpoint is described and supported by a scholar who is an adherent of that view. Authors respond to one another's perspectives and include:

▼▲
I'm the author/artist and I want to review War: Four Christian Views.
Back
×
Back
×