Skip to main content
War and Peace
By: Leo Tolstoy
Stock No: WW447930 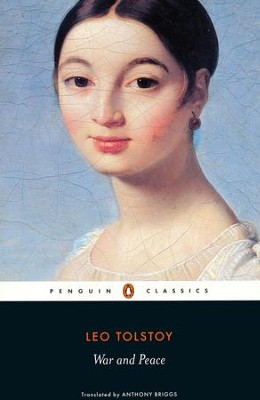 ▼▲
Set against the backdrop of a vast country under dire threat and containing fourteen hundred pages, five hundred characters, and a serious attempt to resolve the questions of how best to live life, this is the basis of the world's finest novel, War and Peace.

It is first and foremost a cornucopia of compelling narrative entertainment on a grand scale, but on a more personal level there are a series of moving stories brimming with intimate detail and with shocking relevance to our own lives and times.

Now available is a new translation of this great classic, the first for half a century, and the first by a man for more than a hundred years. The idiom has been sensitively updated, so as not to betray the original through the vulgarity of sweeping modernisation, but instead to alter the tone gently from the delicate, upper-class English of earlier versions to the kind of vigorous, ordinary speech, which directly reflects Tolstoy's demotic Russian.

Set against the sweeping panoply of Napoleon's invasion of Russia, War and Peace—presented here in the first new English translation in forty years—is often considered the greatest novel ever written. At its center are Pierre Bezukhov, searching for meaning in his life; cynical Prince Andrei, ennobled by wartime suffering; and Natasha Rostov, whose impulsiveness threatens to destroy her happiness. As Tolstoy follows the changing fortunes of his characters, he crafts a view of humanity that is both epic and intimate and that continues to define fiction at its most resplendent.

This edition includes an introduction, note on the translation, cast of characters, maps, notes on the major battles depicted, and chapter summaries.

Praise for Antony Brigg's translation of War and Peace:

"The best translation so far of Tolstoy's masterpiece into English."
-Robert A. Maguire, professor emeritus of Russian studies, Columbia University

"In Tolstoy's work part of the translator's difficulty lies in conveying not only the simplicity but the subtlety of the book's scale and effect. . . . Briggs has rendered both with a particular exactness and a vigorous precision not to be found, I think, in any previous translation."
-John Bayley, author of Elegy for Iris

▼▲
Count Leo Tolstoy was born on September 9, 1828, in Yasnaya Polyana, Russia. Orphaned at nine, he was brought up by an elderly aunt and educated by French tutors until he matriculated at Kazan University in 1844. In 1847, he gave up his studies and, after several aimless years, volunteered for military duty in the army, serving as a junior officer in the Crimean War before retiring in 1857. In 1862, Tolstoy married Sophie Behrs, a marriage that was to become, for him, bitterly unhappy. His diary, started in 1847, was used for self-study and self-criticism; it served as the source from which he drew much of the material that appeared not only in his great novels War and Peace (1869) and Anna Karenina(1877), but also in his shorter works. Seeking religious justification for his life, Tolstoy evolved a new Christianity based upon his own interpretation of the Gospels. Yasnaya Polyana became a mecca for his many converts. At the age of eighty-two, while away from home, the writer suffered a break down in his health in Astapovo, Riazan, and he died there on November 20, 1910.

Anthony Briggs has written, translated, or edited twenty books in the fields of Russian and English literature.

Orlando Figes is the prizewinning author of A People’s Tragedy and Natasha’s Dance. He is a regular contributor to The New York Times, The Washington Post, and The New York Review of Books.

▼▲
“There remains the greatest of all novelists—for what else can we call the author of War and Peace?” —Virginia Woolf

▼▲
I'm the author/artist and I want to review War and Peace.
Back
Back