Skip to main content
SPRING CYBER EVENT STARTS NOW: And it's a really BIG deal! Up to 88% off through 5/24>
Walking with Henry, softcover
By: Rachel Anne Ridge
Stock No: WW397856 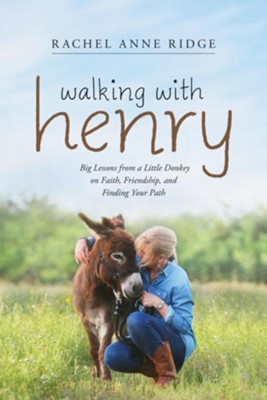 ▼▲
Join Rachel Anne Ridge, author of the beloved memoir Flash, in a journey back to the pasture. When she adopts a second rescue donkey as a companion for Flash--a miniature named Henry--she takes a small first step on a path that leads somewhere she never imagined. This charming true story about walking with donkeys will delight your heart, restore your soul, and help you discover your own way forward. Paperback.

▼▲
“Readers will be clamoring for more.” Publishers Weekly on Flash

Just when you think it’s the end of your story . . . grace shows up.

Sometimes it arrives as a moment of joy in the middle of despair. Sometimes you find it next to a trusted friend along an old, well-trodden path. And sometimes, grace has fuzzy ears, a bristled mane, and hope for a new start.

Join Rachel Anne Ridge, author of the beloved memoir Flash, in a journey back to the pasture. As she adopts a second rescue donkey as a little brother for Flash—a miniature named Henry—she finds that walking with donkeys has surprising lessons to teach us about prayer, renewing our faith, and connecting to God in fresh ways.

Readers all over the world fell in love with Flash and with Rachel’s thoughtful, funny, and poignant stories about what life with a donkey can teach you. Now, meet Henry and join him on a walk that could change everything about how you hope, trust, and move forward from past regrets.

▼▲
Memoirist Ridge (Flash), adopts another donkey in her second memoir of finding path of joy, exasperation, faith, and love in an equine friend. Henderson Number Ten, or Henry, is a miniature rescue donkey who had signs of abuse when she received him from a donkey rescue facility as company for Flash, her first rescue donkey. Henry comes into the pasture with an attitude, staking out his territory and ignoring his penmates. At first, Ridge isn’t sure whether Flash and Henry will make friends, but she’s determined to do what she can. Her optimism grows as she takes daily walks with Henry, who insists on starting out by walking backward before turning himself around. With The Book of Common Prayer as a companion, Ridge records her own journey from grief to joy as she watches Henry recover and show his full personality. She takes readers through his adoption and recovery using tenets of the faith such as the Apostles Creed to prove that “no matter where our journey takes us, we never walk alone.” Ridge’s levity and deep faith will delight fans of her first memoir and round up new animal-loving readers, as well.

▼▲
I'm the author/artist and I want to review Walking with Henry, softcover.
Back
Back