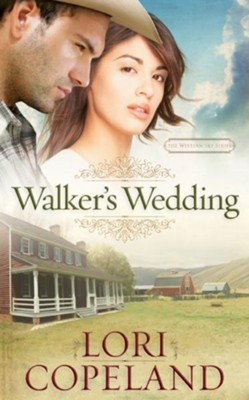 ▼▲
Jilted by his fiancée, Walker McKay is off women for life---but he needs an heir. Wealthy Sara Livingston wants to marry, but her father finds every suitor "unsuitable." So she answers an ad for a mail-order bride. Will Sara's deception and Walker's pain keep them from finding what they really want? Previously titled Marrying Walker McKay.

Bestselling author Lori Copeland (Outlaw's Bride and A Kiss for Cade) weaves together elements of another classic Western romance with themes of redemption, forgiveness, and second chances.

Abandoned by his fiancee hours before their wedding, Walker McKay is determined to never let a woman near his heart again, but he needs an heir to inherit his ranch after he is gone. Courting someone new is out of the question, so he'll have to find a wife another way.

Wealthy heiress Sara Livingston wants to be married, but her suitors are deemed unsuitable by her unreasonable father. When the opportunity to fill the bill for a mail-order bride comes her way, she grabs onto it with both hands.

Will Sara's deception and Walker's wounded heart keep them from finding what they are looking for? Or are they truly meant for one another?

▼▲
Walkers Wedding by Lori Copeland is a fast-paced romance revolving around the dynamic themes of love and forgiveness. Sarah Livingston is a feisty runaway who finds herself in a world of danger and deception when she swaps places with desperate mail-order bride Lucy Mallory. What Sarah doesnt know is that her future husband, Walker McKay, wishes to marry for only one reason. He wants to have a son to inherit his extensive ranch. The resulting conflict of the two strong-willed characters creates a story filled with comical, and sometimes treacherous, misunderstandings about love and lying.

The reader is able to understand the perspectives of both Walker and Sarah because the narration alternates by chapters. Lori Copeland has the ability to grab the imaginations of her readers and string them ahead full force as she unravels her tale. Sarah and Walker make an interesting pair because of their paradoxical conflict and growing love. Their relationship is tested almost to the breaking point when Lucy shows up unexpectedly and demands Walker keeps his promise to her father and marry her. To make matters worse Sarah discovers that Walkers best friend is embezzling money from him. This climax is intense and memorable.

Throughout the story Sarah Livingston is desperate to have a family, just as Walker McKay is desperate for a wife. Despite the rocky beginning to their relationship, they marry. And thats not a spoiler because, unfortunately, all their problems are not finished with the vows. Eventually, the couple has to decide if the blessing of a working marriage is worth the dissolution of individual pride. The answer to this question involves much trouble and a look at both characters pasts. Sarahs character seems underdeveloped. Her personality and temper-tantrums are more suited to a younger girl. Walker also is juvenile in his attribution of all the negative characteristics of his fiancée to the new woman in his life. His lack of rationality in this area makes it difficult to identify with him. However, the ranch foreman and his wife serve as excellent foils for Walker and Sarah. Their wisdom balances out the stubbornness of the younger couple.

Walkers Wedding is an easy-to-read romance novel. The love story might be intriguing to younger girls; however, it lacks the emotional complexity that characterizes adult novels. Instead of developing important ideas, the plot jumps to and from dramatic scenes to add interest. A little more character development and complexity would have better captured an adult audience. There also was not a huge emphasis on the biblical perspective of marriage. Christianity was thrown in haphazardly almost as an afterthought. Nothing was racy or inappropriate, but neither was it an inspirational portrayal of the Christian walk. If you are looking for a quick romantic story, then Walkers Wedding is a good choice.  Anna Soden, www.ChristianBookPreviews.com

▼▲
I'm the author/artist and I want to review Walker's Wedding - eBook.
Back
Back