SHIPPING DELAYS & COVID-19 IMPACT - learn more
CYBER WEEK SALE: Up to 85% off, thru 12/7. >
Waking from the Dream: The Struggle for Civil Rights in the Shadow of Martin Luther King, Jr. - eBook
By: David L. Chappell 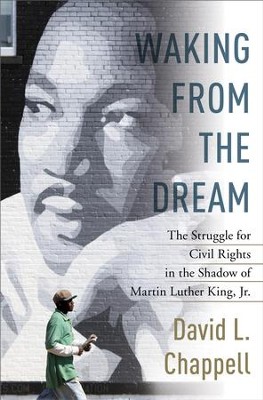 Waking from the Dream: The Struggle for Civil Rights in the Shadow of Martin Luther King, Jr. - eBook

"The previously untold story of continuing struggle and posthumous inspiration that dominates this compelling and groundbreaking book will forever change the way civil rights historians view this era."—Raymond Arsenault, author of Freedom Riders

In this arresting and groundbreaking account, David L. Chappell reveals that, far from coming to an abrupt end with King’s murder, the civil rights movement entered a new phase. It both grew and splintered. These were years when decisive, historic victories were no longer within reach—the movement’s achievements were instead hard-won, and their meanings unsettled. From the fight to pass the Fair Housing Act in 1968, to debates over unity and leadership at the National Black Political Conventions, to the campaign for full-employment legislation, to the surprising enactment of the Martin Luther King holiday, to Jesse Jackson’s quixotic presidential campaigns, veterans of the movement struggled to rally around common goals.

Waking from the Dream documents this struggle, including moments when the movement seemed on the verge of dissolution, and the monumental efforts of its members to persevere. For this watershed study of a much-neglected period, Chappell spent ten years sifting through a voluminous public record: congressional hearings and government documents; the archives of pro– and anti–civil rights activists, oral and written remembrances of King’s successors and rivals, documentary film footage, and long-forgotten coverage of events from African American newspapers and journals.

The result is a story rich with period detail, as Chappell chronicles the difficulties the movement encountered while working to build coalitions, pass legislation, and mobilize citizens in the absence of King’s galvanizing leadership. Could the civil rights coalition stay together as its focus shifted from public protests to congressional politics? Did the movement need a single, charismatic leader to succeed King, and who would that be? As the movement’s leaders pushed forward, they continually looked back, struggling to define King’s legacy and harness his symbolic power.

Waking from the Dream is a revealing and resonant look at civil rights after King as well as King’s place in American memory. It illuminates a time, explores a cause, and explains how a movement labored to overcome the loss of its leader.

▼▲
David L. Chappell is Rothbaum Professor of Modern American History at the University of Oklahoma. He is author of Inside Agitators: White Southerners in the Civil Rights Movement and A Stone of Hope: Prophetic Religion and the Death of Jim Crow.

▼▲
"A vitally needed appraisal of how the civil rights movement re-created itself in surprisingly effective ways after Dr. King’s death . . . No one is better qualified than David Chappell to examine these largely unexplored developments and to make sense of the ironies, tragedies, and triumphs. This is a brilliant, absorbing work that compels us to rethink our conceptions and judgments about the civil rights movement."—Stewart Burns, author of We Will Stand Here Till We Die

"Waking from the Dream powerfully reveals the way the civil rights movement plodded on—in creative, often conflicted, and sometimes surprisingly successful ways—long after King was assassinated. Chappell brings to light the vitality of post-King-era black politics. This is a splendid book about the hard work of democracy—one that will inspire all who care about it."—Jack Turner, author of Awakening to Race

"Chappell brilliantly recovers the usually neglected ferment and experimentation of a generation of Americans who tried to make good the goals of the civil rights movement in the years since Martin Luther King’s assassination. Waking from the Dream is also a masterly, thoughtful examination of the very different ways in which Dr. King’s name has been invoked since 1968."—Tony Badger, Paul Mellon Professor of American History, Cambridge University

"Waking from the Dream offers the kind of clear-eyed analysis of our post–civil rights worlds of politics and memory work that we desperately need. David L. Chappell gets to some essential truths about the costs and benefits of myth-making. It is critical that we know this history so that we can properly contextualize the successes and failures of civil rights politics that brought us to this allegedly post-racial age."—Jonathan Scot Holloway, author of Jim Crow Wisdom

"Beautifully written and thought-provoking . . . Historians have cast the period after King’s death as the New Nadir. The constant invocation of his name by allies, outsiders, and enemies made it appear as if nothing could measure up to his image, memory, or the seminal feats of Montgomery, Birmingham, and Selma. Chappell, however, has uncovered what the bright light of King has blinded so many to—the ongoing work by communities, politicians, and NGOs to build and sustain a more inclusive rights-based nation."—Carol Anderson, author of Eyes off the Prize

"David L. Chappell has long been one of our sharpest and most original historians of civil rights. He confirms that reputation with Waking from the Dream. Chappell invites us to reconsider Dr. King’s legacy and critically appreciate the efforts of those who carried on in the 1970s and 1980s to keep his unfulfilled agenda before the nation’s conscience. This is an important book that will be of tremendous value to anyone interested in the history of race, inequality, and civil rights in modern America."—Eric Arnesen, George Washington University

▼▲
I'm the author/artist and I want to review Waking from the Dream: The Struggle for Civil Rights in the Shadow of Martin Luther King, Jr. - eBook.
Back
×
Back
×