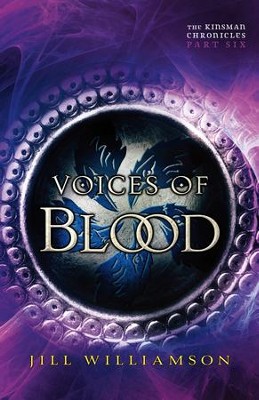 The unanticipated supernatural ability to hear each other's thoughts fills many Armanians with fear and embroils the Armanian people in a bitter conflict. Priests protest this "bloodvoicing" magic as evil, but Prince Wilek believes it a gift from the One God to his Armanite followers.

To honor his newfound faith, Prince Wilek establishes a city called Armanguard and begins building an illustrious castle. He sends explorers to the north to discover what this land might have to offer, putting his brother Trevn in charge of the expedition.

In the west, as spring comes and the ground softens, Charlon sets the Magonian people to planting evenroot and preparing for the long-prophesied uprising of their Deliverer, who they believe will crush the skulls of his enemies, turn their citadels to dust, and make Magonia the ruler of nations.

Voices of Blood is collected together with parts 4 and 5 in King's Blood.

▼▲
Jill Williamson writes fantasy and science fiction for teens and adults. Jill grew up in Alaska, staying up and reading by the summer daylight that wouldn't go away. This led to a love of books and writing, and her debut novel, By Darkness Hid, won several awards and was named a Best Science Fiction, Fantasy, and Horror novel of 2009 by VOYA magazine. She loves giving writing workshops and blogs for teen writers at www.GoTeenWriters.com. She now lives in the Pacific Northwest with her husband, two children, and a whole lot of deer. Visit her online at www.jillwilliamson.com.

▼▲
I'm the author/artist and I want to review Voices of Blood (The Kinsman Chronicles): Part 6 - eBook.
Back
Back