Skip to main content
You Can Hear God's Voice: Supernatural Keys to Walking in Fellowship with Your Heavenly Father
By: Kevin Zadai
Stock No: WW315134 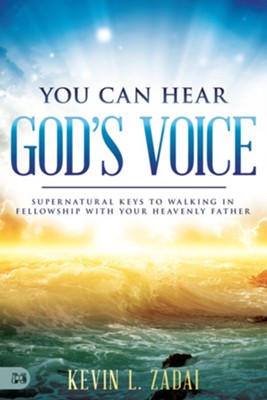 You Can Hear God's Voice: Supernatural Keys to Walking in Fellowship with Your Heavenly Father

God Wants to Talk to You!

Many people go through life wishing they could hear from God. They long to know His plans and purposes for their lives, and they long to benefit from His direction in their daily decisions.

The truth is, you were made to hear God's voice! God created you for intimacy with Him, and He longs to speak with you, moment by moment!

In his latest book, You Can Hear God's Voice, author Kevin L. Zadai helps you develop your ability to hear God's words every day.

As you walk and talk with God, you'll find yourself living the abundant life of blessing that you were meant to live!

▼▲
Kevin Zadai is dedicated to training Christians to live and operate in two realms at once—the supernatural and the natural.  Called to ministry at age 10, he attended Central Bible College in Springfield, Missouri where he received a bachelor degree in theology. Later, Kevin received training in Missions at Rhema Bible College. At age 31, during a routine surgery, he found himself on the ’other side of the veil’ with Jesus in a heavenly visitation that forever marked his life. This encounter ushered his ministry into new dimensions of power, activation and impartation.  Kevin has been employed by Southwest Airlines for 29 years; he and his wife, Kathi, reside in New Orleans, Louisiana and are ordained by Dr. Jesse and Dr. Cathy Duplantis.

▼▲
I'm the author/artist and I want to review You Can Hear God's Voice: Supernatural Keys to Walking in Fellowship with Your Heavenly Father.
Back
Back