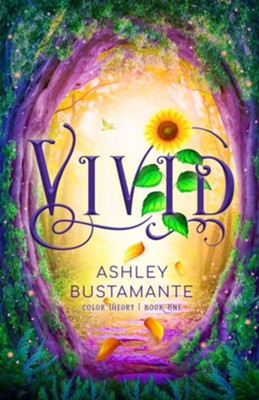 ▼▲
Vivid: The Color Theory Book 1 by Ashley Bustamante, is the author's debut fantasy novel of the Magus world, where colors of red, blue and yellow fuel magic abilities. When Ava Locke was five years old, she began a journey to join the benefactors-the leaders of Magus. Twelve years later, she finds herself on the road to their betrayal. In the land of Magus, both red & blue magic thrive, however, yellow magic is made illegal in an effort to protect people from its mind-controlling capabilities. Elm, a Yellow magic user has escaped imprisonment and shows up at school, and Ava finds herself intrigued by his story and helps him evade the Benefactors. As Ava learns more about the mind-controlling abilities of Yellow magic, she is now questioning if her hasty decisions are her own or if someone else is in control. Filled with mystery and adventure, readers will be reminded of the importance of seeking the truth at all cost, and the need for doing what is right. Hardcover, 304 pages. Recommended for ages 13 years and older.

▼▲
DANGER LURKS BEHIND EVERY COLOR

Ava Locke dives into the mysteries of forbidden Yellow magic and discovers a dark path filled with secrets and injustice.

When Ava Locke was five years old, she began a journey to join the Benefactors—the leaders of the magical continent of Magus. Twelve years later, she unwittingly started down the road to betray them.

On Magus where colors fuel magical abilities, yellow is banned in an effort to protect people from its mind-controlling capabilities. When a rogue Yellow magic-user named Elm escapes imprisonment Ava becomes innocently fascinated with his story. Once this mysterious Elm shows up at her school, Ava pushes her interest to the next level by helping him evade the Benefactors. Ava grows increasingly conflicted as her intrigue leads her down a dark road of secrets about her world. As she learns more about Yellow magic’s potential to control its victims, Ava now must question whether her rash decisions are all her own or if someone else is pulling the strings.

▼▲
Ashley Bustamante has created stories from the moment she could scribble and staple sheets of paper together. She simply cannot recall a time when writing was not a force in her life. When not running through lines of dialogue in her mind, she enjoys taking photographs and spending time with her husband, three children, and any furry, feathered, or scaly creature she can find. She currently works at Arizona State University.

▼▲
"I was swept away in the magical world of Vivid. This rich fantasy is bursting with romance, mystery, and characters both dark and delightful. Strikingly original, Vivid is a story that you'll remember long after you close the book." — Jessica Arnold, author of The Looking Glass and The Lingering Grace
-- Jessica Arnold

"Ashley Bustamante’s Vivid is as rich and colorful as its title suggests. The land of Magus blooms to life from page one, drawing you into an addictive world of irresistible—and forbidden—magic. I simply couldn’t put it down. Readers will swoon over this fantastical debut." — Sara Ella, award-winning author of the Unblemished trilogy and Coral
-- Sara Ella

"Vivid is exactly the magical read I was looking for! It's an exquisite story with unforgettable characters, and I cannot wait for more in this series!" — S.D. Grimm, author of Children of the Blood Moon series and A Dragon By Any Other Name
-- S.D. Grimm

"Captivating. Ashley Bustamante expertly draws the reader into the Magus world where Red and Blue magic thrive and Yellow magic is outlawed. Vivid felt like reading a fresh new take on a dystopian society and something akin to The Story Peddler’s magic. If that isn’t enough, the relationship between Ava and Elm kept me flipping pages for more." — Candice Pedraza Yamnitz, author of Unbetrothed
-- Candice Pedraza Yamnitz

This first book in a new series is focused on worldbuilding...compelling magical fare for early teens. Innocent romance...and the hint of a battle to come will hook readers for the next installment.
-- Kirkus Reviews

▼▲
I'm the author/artist and I want to review Vivid: The Color Theory Book 1.
Back
Back