Shipment delay - click here for more details
The Unread Vision: The Liturgical Movement in the United States of America 1926-1955
By: Keith F. Pecklers 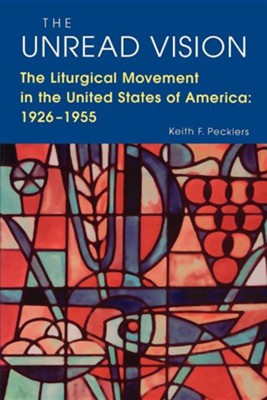 The Unread Vision: The Liturgical Movement in the United States of America 1926-1955

▼▲
From the Publisher In this historical examination of the liturgical movement in the United States, the author calls for a new movement emphasizing the inseparable relationship between liturgy and social justice.

The Second Vatican Council changed the practice of liturgy. Conciliar developments, however, did not emerge in a vacuum; they were the result of years of hard work that involved thousands of people across the United States and the world.

Keith F. Pecklers, SJ, is professor of liturgical theology and history at the Pontifical Liturgical Institute, Rome, Italy. He is also the author of "Liturgy from Trent to Vatican II" included in theHandbook of Liturgical Studies published by The Liturgical Press.

▼▲
Keith F. Pecklers, SJ, is professor of liturgy at the Pontifical Gregorian University and professor of liturgical history at the Pontifical Liturgical Institute in Rome. He is the author of the following titles published by Liturgical Press: Dynamic Equivalence: The Living Language of Christian Worship; The Unread Vision: The Liturgical Movement in the United States of America 1926-1955; Worship: A Primer in Christian Ritual; and editor of Liturgy for the New Millennium: A Commentary on the Revised Sacramentary. He is also the author of "Liturgy from Trent to Vatican II" included in the Handbook of Liturgical Studies published by Liturgical Press.

▼▲
Keith Pecklers is an emerging leader of a new generation of liturgical scholars who brings both theological and historical wisdom to bear on a movement that began long before Vatican II and, indeed, prepared the way for the council. His book is at once thoroughly documented and clearly written. It is an especially valuable resource for understanding the longstanding and pastorally crucial connection between liturgy and social justice.
Richard P. McBrien, Crowley-O'Brien-Walter Professor of Theology, University of Notre Dame

It is simply the best overall work on the U.S. Liturgical Movement available today. May the vision so eloquently described in its pages cease being unread.
Mark R. Francis, CSV, Associate Professor of Liturgy, Catholic Theological Union at Chicago

[Pecklers'] contention that the principles and goals of the pioneers remain valid and relevant is clearly demonstrated in this work; his suggestion that the liturgical movement needs re-founding today is undeniable. The Unread Vision will certainly assist us in such efforts.
Kathleen Hughes, RSCJ

Without doubt, Pecklers has written the best and most comprehensive history of the liturgical movement in the United States. He analyzes in depth its European roots and shows how those roots expanded in American soil. The Unread Vision is a remarkable achievement and a fine contribution to the history of the Church in the United States in this century.
Archbishop Rembert G. Weakland, OSB

This history of the early stages of the liturgical movement and the associated issues will be of interest not only to liturgy students and historians interested in the past but all concerned about the possible future of the liturgy in the United States. It has much to tell us about the interrelatedness of liturgy and social justice.
Theodore M. Hesburgh, CSC, President Emeritus, University of Notre Dame

Most notable - and invaluable - is Pecklers' approach to the essential link between renewal of participatory celebration of Christian worship and the other movements in the Church during the period 1926-1955. The obvious ones were the related biblical, catechetical, and ecumenical enterprises, but The Unread Vision analyzes and chronicles the close developments in education, the arts, and above all the social movements in the church community of the three decades.
Frederick R. McManus

This valuable book 'is the first [volume] to treat the movement [in the U.S.A.] synthetically' (cover copy). . . . As a whole this book is an informative and successful description of the Liturgical Movement in the U.S.A. and an enrichment to scholarship on this epoch as a whole. We agree with the author that genuine liturgical practice demands an expansion into Christian action; however, it seems to this reviewer that this aspect is emphasized a little too much. Nevertheless, even for European liturgiology of this epoch this will in future be a basic resource.
Archiv Für Liturgiewissenschaft

▼▲
I'm the author/artist and I want to review The Unread Vision: The Liturgical Movement in the United States of America 1926-1955.
Back
×