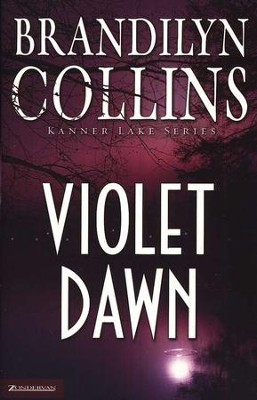 ▼▲
From the author of the best-selling Eyes of Elisha comes a suspenseful tale of murder, the need to belong---and faith. As Paige Williams slips into her hot tub in the blackness of night, she feels something wispy brush against her. Suddenly facing death, what wrenching decision must she make about her hidden past? 352 pages, softcover from Zondervan.

Something sinuous in the water brushed against Paige’s knee. She jerked her leg away. What was that? She rose to a sitting position, groped around with her left hand. Fine wisps wound themselves around her fingers. Hair? She yanked backward, but the tendrils clung. Something solid bumped her wrist. Paige gasped. With one frantic motion she shook her arm free, grabbed the side of the hot tub, and heaved herself out. Paige Williams slips into her hot tub in the blackness of night—and finds herself face to face with death. Alone, terrified, fleeing a dark past, Paige must make an unthinkable choice. In Violet Dawn, hurtling events and richly drawn characters collide in a breathless story of murder, the need to belong, and faith’s first glimmer. One woman’s secrets unleash an entire town’s pursuit, and the truth proves as elusive as the killer in their midst.

Brandilyn Collins, known for her trademark Seatbelt Suspense™, is the bestselling author of Violet Dawn, Coral Moon, Crimson Eve, Eyes of Elisha, and other novels. She and her family live in Coeur d’Alene, Idaho. Visit her website at www.brandilyncollins.com and her blog at www.forensicsandfaith.blogspot.com

▼▲
As a shy newcomer in the tiny tourist community of Kanner Lake, Idaho, Paige Williams is already considered reclusive by the gregarious standards of the village. But townspeople don't realize that Paige is fleeing a past so damaging that when she discovers a dead body, she dispenses with the evidence and hides the truth rather than go to the police, whom she mistrusts. With this opener, Collins (Dead of Night) spins a tale of murder in a smalltown with an added twist of Christian faith, which is lightly handled. The writing is competent for the most part, with false notes occurring in some formal and stilted dialogue and Collins's penchant for overusing dramatic similes ("her heart drummed like the rataplan of rain on a roof"). One real strength is Collins's skill in handling multiple points of view and time shifts, which flow easily together and advance the plot. Short chapterlets keep the story moving, particularly in the fast-paced final third of the novel, and Collins throws in some interesting details of police procedure and crime scene investigation. Some characters, like the town's tough-but-tender police chief, are beautifully developed, while others, such as the monologues and predictability of the villain, are flat. In all, however, this is a promising and entertaining beginning to the Kanner Lake series. (Sept.) Copyright 2006 Reed Business Information.

▼▲
Plagued by insomnia, Paige Williams steps into her hot tub one night and finds a corpse. She cant tell the police, and so must make an unthinkable choice  one that will affect the entire small town of Kanner Lake.
The town has a cast of eccentric and lovable characters  Bailey Truitt, owner of the Java Joint, a local hangout; Vince Edwards, the police chief still grieving the son killed in Iraq; Leslie Brymes, a young journalist wanting to make it big; Wilbur Hucks, an ornery coot who insist on showing everyone he meets his triple-bypass scar; and there are others.
Between their stories flows the tale of a young girl growing up in a difficult home. And through it all slithers a killer who calls himself Black Mamba.
Brandlyn Collins gives her signature seatbelt suspense a different twist in this new series. She spreads her depth of characterization over a town full of people, lessening the thriller impact only slightly. Keeping the pace brisk, the main plot covers less than 24 hours. To tie in with her new series, Collins has created a blog which features posts from the novels supporting cast, where readers can go to learn more about the characters. Recommended for all suspense fans and even those who are a bit chicken about the genre.  Katie Hart, Christian Book Previews.com

▼▲
I'm the author/artist and I want to review Violet Dawn, Kanner Lake Series #1.
Back
Back