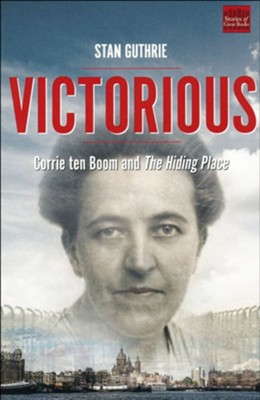 ▼▲
"Stan has given us a book that is full of insight—about the life of one great woman, yes, but also about some of the most complicated, nuanced, and significant questions of our time. The life of Corrie ten Boom is compelling testament to God’s power and presence in the life of one of his beloved servants, and it is also a powerful inspiration for our journeys of faith and calling." —Ruth Haley Barton, founder, Transforming Center and author of Strengthening the Soul of Your Leadership

This is the story of how Corrie ten Boom’s 1971 classic, The Hiding Place, came into being, sold millions, and helped shape the faith of a generation.

Some books have such an impact on people that they become more than a book – they influence a generation, and beyond. Guthrie tells the story of Corrie ten Boom’s The Hiding Place. Ten Boom was a simple watchmaker in The Netherlands when World War II began, and soon, by faith and determination, she became a heroine of the resistance to Hitler and the Nazis. She survived the concentration camps and became one of the twentieth century’s most important evangelists.

Nearly half a century after it was first published, The Hiding Place still thrills and challenges readers with its portrait of Corrie ten Boom: an imperfect servant of Jesus, who was determined to defy evil, defend the weak, and endure hardship.

▼▲
Stan Guthrie is the author or co-author of six books and is an editor at large for the Colson Center for Christian Worldview, a former editor and writer for Christianity Today, and a former managing editor for Evangelical Missions Quarterly. His articles, scripts, columns, and commentaries have reached millions through BreakPoint.org, ChristianHeadlines.com, Wheaton magazine, Inside Journal, Moody, The Wall Street Journal, and The Gospel Coalition. He lives in the suburbs of Chicago.

▼▲
"The story of Corrie ten Boom is timeless, and I’m grateful that Stan Guthrie’s new book, Victorious, is reawakening a fascination with this remarkable woman’s witness. I was in my early 20s when I grew to know and love ’Tante Corrie,’ and her tender, yet no-nonsense way of walking with her beloved Jesus helped shape my own life story. Her last words, spoken to me in her thick Dutch accent? ’Joni, one day we shall dance together in heaven!’ And I’m still waiting for that dance. Turn the page and get to know this saint-of-the-age, as well as the history and details behind her amazing testimony. Her life may end up shaping your story, too!" –Joni Eareckson Tada, Joni and Friends International Disability Center

"I grew up on The Hiding Place. Not only did our family read it; we told and retold each other the harrowing stories from the book’s pages. In the process, Corrie ten Boom’s powerful, real-life account of faith and forgiveness in the face of unspeakable evil shaped my imagination. I am far from alone. The book has impacted millions and now Guthrie, a skilled journalist and historian, is helping us understand why. With fascinating details about Corrie’s life, and insight into post-war evangelicalism, Guthrie paints a vivid picture of the wider world into which the book was born. Victorious will intrigue people who have never read The Hiding Place. And it will enable those of us who have to encounter it again for the first time." —Drew Dyck, author of Your Future Self Will Thank You: Secrets to Self-Control from the Bible and Brain Science

"Corrie ten Boom's faith and courage during World War II are on full display in her classic book, The Hiding Place, and in my own writings I’ve made no secret of my tremendous admiration for her. But Stan Guthrie's book, Victorious, demonstrates Corrie's continuing relevance for many current challenges, including refugees, anti-Semitism, and sharing the love of God in a skeptical age. Highly recommended." —Eric Metaxas, #1 New York Times best-selling author of Bonhoeffer: Pastor, Martyr, Prophet, Spy, 7 Women: And the Secret of Their Greatness, and host of the nationally syndicated Eric Metaxas Radio Show

Tell us a little about yourself.  Stan Guthrie is the author or co-author of six other books: Missions in the Third Millennium: 21 Key Trends for the 21st Century; All That Jesus Asks: How His Questions Can Teach and Transform Us; The Sacrament of Evangelism (co-authored with Jerry Root); A Concise Guide to Bible Prophecy: 60 Predictions Everyone Should Know; God's Story in 66 Verses: Understand the Entire Bible by Focusing on Just One Verse in Each Book; and The Seven Signs of Jesus: God's Proof for the Open-Minded. Stan is an editor at large for the Colson Center for Christian Worldview, a former editor and writer for Christianity Today, and a former managing editor for Evangelical Missions Quarterly and editor of World Pulse. Stan and his wife, Christine, have three children and two grandchildren and live in Chicagoland.

What was your motivation behind this project?  My book, while taking an admiring stance about Corrie, goes well beyond the hagiography we often see in books about great Christians by showing how Corrie's life applies to contemporary issues such as anti-Semitism, refugees, and evangelism in an increasingly skeptical age. The book has been endorsed by John Stonestreet, Eric Metaxas, Joni Eareckson Tada, and Ruth Haley Barton. It is the first volume in Paraclete Press's Stories of Great Books series.

What do you hope folks will gain from this project?  This book presents Corrie ten Boom as a whole person, with her warts (temper, slowness at times to forgive, workaholism) and her incredible strengths (love for the Jews, her family, vision to reach the lost). It presents little-known facts and first-person accounts from Elizabeth Sherrill, her biographer; Brother An-drew, her fellow countryman and ministry partner; and Pam Rosewell Moore; Corrie's ministry helper in her later years. You'll learn the real, heretofore unknown story of how Corrie's costly love for the Jews was made into a best-selling biography and a hugely popular film. You'll see her passion to share her Savior with Jewish people combined with her reluctance to help other ministries engaging in Jewish evangelism. You'll see answers to the groundless charge that Corrie's family downplayed anti-Semitism. You'll note important similarities and differences with another blockbuster book about the Holocaust, Anne Frank: The Diary of a Young Girl. You'll uncover the deep roots of her family's love for the Jewish people. You'll grasp how Corrie's priorities challenge every Christian to share the good news in a post-Christian culture, stand against anti-Semitism, advocate for refugees in a world that would rather look away, and learn from the elderly in a culture that ignores or even seeks to kill them. The Hiding Place is a book for all seasons. Victorious: Corrie ten Boom and The Hiding Place brings it up to date .

How were you personally impacted by working on this project?  I was reminded that while Corrie's world during the Second World War and afterward was far different than my own, the major issues she faced were perennial--the Jews as God's beloved people, the scourge of anti-Semitism, the dignity of all people (including refugees, the unborn, and the aged), the necessity of evangelism--and require a response of courage and commitment from Christians of every age. I was encouraged to remember that God can use each of us, no matter how young or old we are, and that we are valuable to Him whether we are "useful" or not.

Anything else you'd like readers / listeners to know:  You can download a free Discussion Guide for your Sunday school class, small group, or personal devotions at the book listing on the Paraclete Press website.