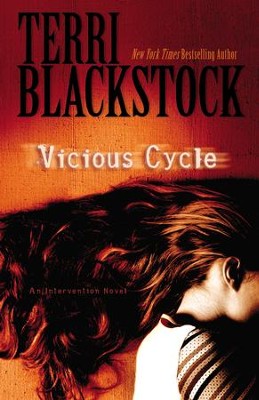 ▼▲
When fifteen-year-old Lance Covington finds an abandoned baby in the backseat of a car, he knows she's the newborn daughter of a meth addict he's been trying to help. But when police arrest him for kidnapping, Lance is thrust into a criminal world of baby trafficking and drug abuse. His mother, Barbara, looks for help from Kent Harlan-the man whom she secretly, reluctantly loves and who once helped rescue her daughter from a mess of her own.

Kent flies to her aid and begins the impossible work of getting Lance out of trouble, protecting a baby who has no home, and finding help for a teenage mother hiding behind her lies. In this latest novel of suspense and family loyalty, bestselling author Terri Blackstock offers a harrowing look at drug addiction, human trafficking, and the devastating choices that can change lives forever.

▼▲
Vicious Cycle by Terri Blackstock is about choices and temptation. Barbara Covington, a widower and mother of two teenagers, must try to clear her sons name after he's accused of kidnapping a meth addict's newborn daughter. As the story progresses, Barbara struggles with insecurity and with allowing herself to be in love once more.

Barbara's relationship with her children is strong, and she always tries to do what she thinks is best for them, even going so far as to have Lance put in lockdown for his own safety. Kent is in love with Barbara, but is also afraid to show his feelings outright. Jordan is a poor lost soul who gives her baby to Lance, hoping that he will find a better home for the child. One scene I wont forget easily is when Emily goes into a meth house searching for Jordan and the struggles she faces not to give in to the temptation to do drugs again. Throughout the temptation, she tries to remember a verse she learned in rehab, 1 Corinthians 10:13.

It has been a year since Barbara's daughter Emily started rehab, and all Barbara is hoping for is to welcome Emily home again. Now, with her son in jail under charges of kidnapping, all her plans are turned upside down as she tries to get Jordan to tell the truth and clear her sons name. She attempts to confront Jordan at her home, but must first deal with Jordans conniving, manipulative, meth-addicted mother. As the plot moves forward, she and Kent discover evidence of an illegal baby trafficking operation that involves Jordan and her infant, Grace. In the end, they must race against the clock to save Lance, Jordan, and Grace from the human traffickers.

Barbara endeavors to be strong for her kids and do everything in her power to keep them safe. She also strives to be a friend to Jordan, although Jordan often rejects her friendship. Jordan struggles to overcome her addiction, failing most of the time. But she does what she thinks is best for Grace, selflessly planning to give her up for adoption. Her choices and their consequences are large aspects of the plot.

The book is well written and highly engrossing. Blackstock's fans will appreciate this sequel to her book Intervention. It deals with hard topics, such as responsibility, temptations, and consequences. I would definitely recommend it for fans of good Christian literature.  Nathan Sturgis, www.ChristianBookPreviews.com

▼▲
I'm the author/artist and I want to review Vicious Cycle, Intervention Series #2.
Back
×
Back
×