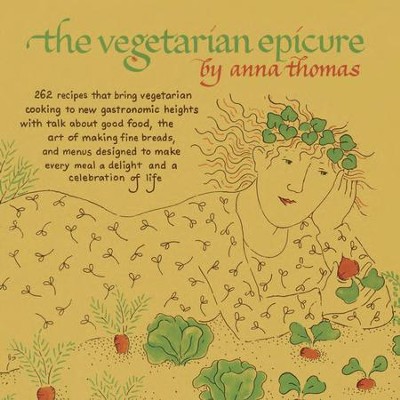 ▼▲
The classic cookbook—which has sold almost a million copies—from the vegetarian pioneer, who paved the way for Mollie Katzen and Deborah Madison. Here, Anna Thomas shows home cooks how to prepare 262 delicious vegetarian dishes, from soups and bread to curries and sweets. Gorgeously illustrated with charming line illustrations, and also featuring tips on menu planning, advice on entertaining, and holiday recipes, The Vegetarian Epicure is an essential kitchen companion for vegetarians and vegetable lovers alike.

▼▲
Anna Thomas wrote her first cookbook, The Vegetarian Epicure, while she was a film student at UCLA, and followed it a few years later with The Vegetarian Epicure, Book Two. When she is not cooking, she writes screenplays and produces films. Her screen credits include My Family, Mi Familia and El Norte, both of which were nominated for an Academy Award. She lives in Ojai, California, with her husband, Gregory Nava, and their two sons.

▼▲
I'm the author/artist and I want to review VEGETARIAN EPICURE: 262 Recipes - eBook.
Back
×
Back
×