My Utmost For His Highest - Updated Edition
By: Oswald Chambers 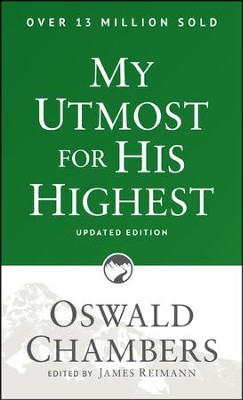 My Utmost For His Highest - Updated Edition

▼▲
Born in 19th-century Scotland, Chambers had a preaching ministry that reached as far as the United States and Japan! Learn why his beloved daily devotional continues to inspire Jesus' followers worldwide. Timeless and anchored in Scripture, it will challenge you to grow in your faith and cultivate ever-greater obedience to Christ. Features updated language.

▼▲
My Utmost for His Highest has been a proven, best-selling devotional for many years. Over the past century, Oswald Chambers’s writings have inspired countless people to drink deeply from the biblical truths that he so passionately championed. His words are simultaneously penetrating and invigorating, and they trigger something in your soul leaving you forever changed. The biblical thoughts and themes that Chambers delivers in this updated-language edition will resonate with you as you seek to grow your faith.

▼▲
Oswald Chambers (1874-1917) is best known for the classic devotional My Utmost for His Highest. Born in Scotland, Chambers had a teaching and preaching ministry that took him as far as the United States and Japan. He died at age forty-three while serving as chaplain to British Commonwealth troops in Egypt during World War I.
James Reimann (1950–2013) was a Christian bookstore owner in Atlanta. He served on the Christian Bookstore Association board and as executive vice president and chief operating officer of Family Christian Stores. He was editor of the classic works My Utmost for His Highest, Streams in the Desert, Morning by Morning, and Evening by Evening. An ordained minister, he taught the Bible for over thirty years and led more than two dozen tours to Israel.

▼▲
I'm the author/artist and I want to review My Utmost For His Highest - Updated Edition.
Back
×
Back
×