Skip to main content
Woke Church: An Urgent Call for Christians in America to Confront Racism and Injustice
By: Eric Mason
Stock No: WW416988 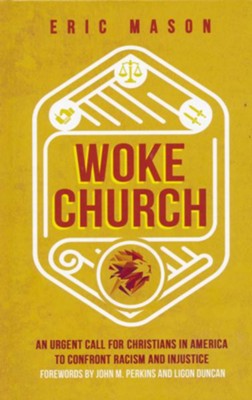 Sample Pages
Buy Item Our Price$10.99 Retail: Save 27% ($4.00)
3 out of 5 stars for Woke Church: An Urgent Call for Christians in America to Confront Racism and Injustice (2 Reviews)
In Stock
Quantity:
Stock No: WW416988
Moody Publishers / 2018 / Hardcover
Quantity:
Add To Cart
of These in Your Cart

Woke Church: An Urgent Call for Christians in America to Confront Racism and Injustice

By: Eric Mason
Moody Publishers / 2018 / Hardcover
3 out of 5 stars for Woke Church: An Urgent Call for Christians in America to Confront Racism and Injustice (2 Reviews) Write a Review
In Stock
Stock No: WW416988

Dr. Eric Mason challenges the church in America: Get up, sleeper, and rise up from the dead. It’s time to take a hard look at our history and stand together against the indignities and injustice in our world – to understand that justice is both theological and sociological – that there is no intimacy with God without justice in one’s heart.

No more waiting. No more sleeping. Christ our King is coming back, and He’ll be looking for a woke church.

The prophets of old were not easy to listen to because they did not flatter.  They did not cajole. They spoke hard words that often chafed and unsettled their listeners. Like the Old Testament prophets, and more recent prophetic voices like Frederick Douglass, Dr. Eric Mason calls the evangelical church to a much-needed reckoning. In a time when many feel confused, complacent, or even angry, he challenges the church to:

Be Aware – to understand that the issue of justice is not a black issue, it’s a kingdom issue. To learn how the history of racism in America and in the church has tainted our witness to a watching world.

Be Redemptive – to grieve and lament what we have lost and to regain our prophetic voice, calling the church to remember our gospel imperative to promote justice and mercy.

Be Active – to move beyond polite, safe conversations about reconciliation and begin to set things aright for our soon-coming King, who will be looking for a WOKE CHURCH.

▼▲
DR. ERIC MASON is the founder and pastor of Epiphany Fellowship in Philadelphia, PA. He and his wife, Yvette, have four children. After more than two decades of gospel ministry, Dr. Mason has become known for his passion to see the glory of Jesus Christ robustly and relevantly engaged in broken cities with the comprehensive gospel. He helps coach and train families to plant churches locally, nationally, and internationally. He is the founder and president of Thriving, an urban resource organization committed to developing leaders for ministry in the urban context, and is the author of three books, Manhood Restored, Beat God to the Punch, and Unleashed. He is the recipient of multiple earned degrees, including a BS in Psychology from Bowie State University, a Master of Theology from Dallas Theological Seminary, and a Doctoral degree from Gordon-Conwell Theological Seminary.

DR. JOHN M. PERKINS is the founder and president emeritus of the John and Vera Mae Perkins Foundation and co-founder of Christian Community Development Association. He has served in advisory roles under five U.S. presidents, is one of the leading evangelical voices to come out of the American civil rights movement, and is an author and international speaker on issues of reconciliation, leadership, and community development. For his tireless work he has received 14 honorary doctorates from universities including: Virginia University of Lynchburg, Wheaton College, Gordon College, Huntington College, Geneva College, Spring Arbor University, North Park College, and Belhaven College. In 2004 he partnered with Seattle Pacific University to launch the campus-based John Perkins Center for Reconciliation, Leadership Training, and Community Development.

▼▲
I'm the author/artist and I want to review Woke Church: An Urgent Call for Christians in America to Confront Racism and Injustice.
Back
Back