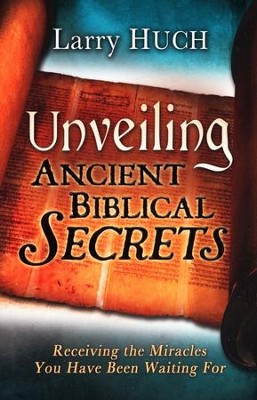 ▼▲
In Unveiling Ancient Biblical Secrets, Pastor Larry Huch reveals God's ancient blessing for your life, such as: destruction of the curse of poverty, healing beneath the wings of the tallit, the covenant of success and more. By understanding and tapping into these timeless truths, Christians can rediscover the destiny that God intends for His people.

In Unveiling Ancient Biblical Secrets, Pastor Larry Huch reveals God’s ancient blessings for your life, such as: By understanding and tapping into these timeless truths, Christians can rediscover the destiny that God intends for His people. We were meant to be shining examples of God’s power, blessing, and favor!

▼▲
Larry and Tiz Huch are the founding and senior pastors of New Beginnings Church in Bedford, Texas, in the DFW Metroplex. Founded in November 2004, this nondenominational church has quickly developed into a diverse and distinctly multiethnic congregation. Pastor Larry and his wife Tiz are currently celebrating their forty-third year of ministry. They have pioneered seven different churches in America and Australia as well as starting Larry Huch Ministries, their worldwide ministry. In addition to their local church, their services are streamed live daily to multitudes of people all around the world. These high-energy, compassionate, and relevant pastors are influential leaders who have a deep commitment to seeing people succeed in every area of life.

In the early 1990s, Pastors Larry and Tiz launched their television program and media ministry. It has grown, expanded, and is broadcast daily around the world in nearly every nation. Their program, New Beginnings, is watched and followed by hundreds of thousands of people whose lives have been dramatically impacted and changed. Pastor Larry’s signature combination of humor, dynamic teaching, relevant style, great compassion, and deep understanding of the Bible have made him one of the most popular teachers on Christian television today.

Through the ongoing faithful support of their church congregation and television ministry partners, they can do outreaches, feeding programs, and projects that span the globe. In places such as Zimbabwe, Haiti, Dominican Republic, Israel, and many more, these projects demonstrate the spiritual and tangible love of God and God’s people. Pastor Larry has brought many life-changing revelations to the body of Christ, including the teachings on breaking family curses in his books Free at Last and The 7 Places Jesus Shed His Blood. But perhaps the most extraordinary and important revelation is his teachings on restoring the Jewish roots of Christianity.

Over the past several decades, Pastor Larry has become a recognized authority and acclaimed writer on the Jewish roots of our Christian faith. He strongly believes in studying and teaching the Word from a Jewish perspective. His books Torah Blessing and Unveiling Ancient Biblical Secrets go into great depth and detail in explaining how and why the church needs to return to the ancient Hebrew understanding of the Scriptures. Pastor Larry’s most recent book, The Seven Living Prophecies, is about Israel and its importance in the world and in these end times. These teachings are a revelation that is not only fascinating but will bring the Bible to life as never before. Pastors Larry and Tiz are unquestionably dedicated to building bridges of peace, friendship, and unity between Christians and Jews.

They live by and teach the ancient Jewish concept of Tikkun Olam, "repairing a broken world," and that we are each "blessed in order to be a blessing." Their charitable outreaches and projects in Israel have blessed, saved, and impacted multitudes of Jewish lives around the world.

Pastors Larry and Tiz are the proud parents of three wonderful adult children, a son-in-law, and daughter-in-law, all of whom are active leaders and pastors on staff at their church, New Beginnings. Their four grandchildren, the "Sugars," are the loves of their lives.

▼▲
I'm the author/artist and I want to review Unveiling Ancient Biblical Secrets.
Back
Back