Shipment delay - click here for more details
Billy: The Untold Story of a Young Billy Graham and the Test of Faith that Almost Changed Everything - eBook
By: Bill McKay, Ken Abraham 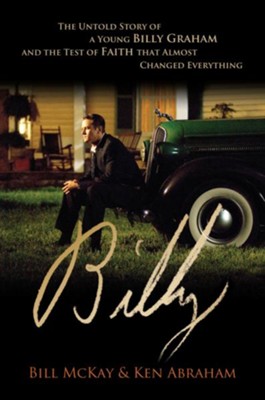 Billy: The Untold Story of a Young Billy Graham and the Test of Faith that Almost Changed Everything - eBook

▼▲
Before he became America's pastor, he was simply known as "Billy." Hear the story of Billy Graham's beginnings at Wheaton, how he met Ruth Bell, and the unexpected challenge that almost changed the course of his life. Billy's good friend Charles Templeton was already a successful preacher, and the two young men strategized to evangelize the world. But their plans took a drastic turn when Templeton had a crisis of faith and became an atheist. Discover the stunning impact of that decision in this story of betrayal, hope and redemption!

The remarkable true story of a young Billy Graham and his best friend who walked away from the faith.

We all know how the story ends but how did it begin? Before he became a household name, and America's Pastor, he was simply known as Billy.  When he wasn't playing baseball, he was discovering his love for Christian ministry.  His best friend, Charles Templeton, was already on track to be a highly successful evangelist and the two young men began strategizing on how to win the world for Christ. That plan takes a drastic turn, however, when Templeton deserts the faith and becomes an atheist. The impact of this decision on a young Billy Graham is immeasurable and agonizing. Charles would later become the great intellectual architect for agnosticism and atheism.  Billy would become the single greatest messenger for the Christian Gospel.  It is one of the great untold dramas between friends - Atheism vs Christianity, betrayal and hope.

Ken Abraham is a New York Times best-selling author known around the world for his collaborations with high-profile public figures. A former professional musician and pastor, he is a popular guest with both secular and religious media. His books include One Soldier's Story with Bob Dole, Payne Stewart with Tracey Stewart, Falling in Love for All the Right Reasons with Dr. Neil Clark Warren, and Let's Roll! with Lisa Beamer.

▼▲
I'm the author/artist and I want to review Billy: The Untold Story of a Young Billy Graham and the Test of Faith that Almost Changed Everything - eBook.
Back
×
Back
×