Skip to main content
The Recent Unpleasantness: Calvary Church's Role in the Preservation of the Episcopal Church in the Diocese of Pittsburgh - eBook
By: Harold T. Lewis
Stock No: WW110383EB 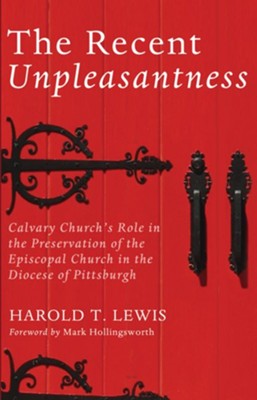 The Recent Unpleasantness: Calvary Church's Role in the Preservation of the Episcopal Church in the Diocese of Pittsburgh - eBook

▼▲
In the wake of the 2003 General Convention approval of the consecration of Gene Robinson, an openly gay and partnered man, to be a bishop, the Convention of the Diocese of Pittsburgh took steps to secede from the Episcopal Church. When it became clear that by rewriting and reinterpreting the canons, the Diocese deemed itself entitled to the assets of the Diocese, the Rector and Vestry of Calvary Church, Pittsburgh, took the unprecedented, and as it turned out, successful action of challenging these actions in civil court, by suing the bishop and other officers of the Diocese. The Recent Unpleasantness tells the story of the circumstances in church and society that long predated Robinson's election, which set the stage for these developments, and discusses the ramifications of the lawsuit in the Diocese of Pittsburgh, the Episcopal Church, and throughout the Anglican Communion. It is an intriguing tale of the interface of bishops and archbishops, prelates and primates, synods and standing committees, and addresses issues surrounding the challenges and costs of rebuilding a church "by schisms, rent asunder, by heresies distressed."

▼▲
Harold T. Lewis served as rector of Calvary Episcopal Church, Pittsburgh, PA from 1996-2012. He has taught in seminaries in the United States, the Congo, South Africa, Barbados and Mozambique. He is the author of Yet With a Steady Beat: The African American Struggle for Recognition in the Episcopal Church; Christian Social Witness; and A Church for the Future: South Africa as the Crucible for Anglicanism in a New Century He holds a PhD in Theology from the University of Birmingham (UK).

▼▲
I'm the author/artist and I want to review The Recent Unpleasantness: Calvary Church's Role in the Preservation of the Episcopal Church in the Diocese of Pittsburgh - eBook.
Back
Back