Unplanned Journey: A Triumph in Life and Death
By: Tanya Unkovich 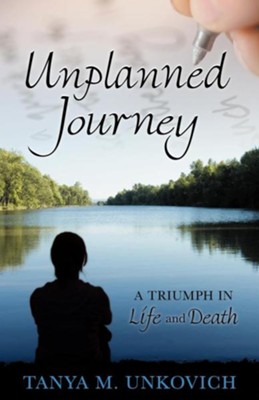 Unplanned Journey: A Triumph in Life and Death

▼▲
"Whatever He wants, were some of the final words of Philip Joseph Morrow late in the night of April 12, 2005. He was looking at a picture of Jesus which was upright at the end of his hospital bed, occasionally raising his head to look up at it. Can you see him, Honey I would say to him. Sure can, he is my mate was Phil?'s response. That night, at just after 11:11pm, Phil finally met his mate Jesus.This is the story that Philip wanted told. He kept a detailed account of his journey and process for the five months leading up to his death as did his wife Tanya for the months thereafter. This is a story of faith and hope. It brings hope and courage to others who are facing the grief of loss and are now finding their way in life. The author also reveals her process for the twelve months after that April night and the raw emotion which accompanies grief. She openly shares of how it was her faith and abandonment to God which always saw her through.

▼▲
I'm the author/artist and I want to review Unplanned Journey: A Triumph in Life and Death.
Back
×