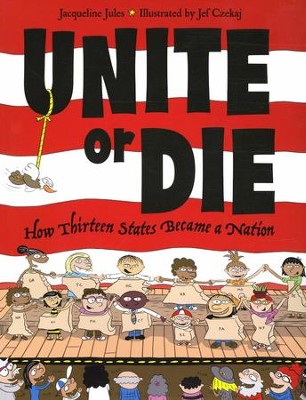 Unite or Die: How Thirteen States Became a Nation

▼▲
The children of Forest Lake Elementary School trod the boards in a dramatic reenactment of how the United States Constitution came to be. After the Revolution, the young United States was anything but united. The states acted like thirteen separate countries, with their own governments, laws, and currencies. It took bravery, smarts, and a lot of compromises to create a workable system of government under the new constitution.

▼▲
Learn the history of the young United States and how the original thirteen colonies wrote the Constitution in this humorous introduction to American history told through a classroom play.


Readers will follow the children of Forest Lake Elementary School as they trod the boards in a dramatic reenactment of the writing of the United States Constitution. After the Revolution, the United States was anything but united. The states acted like thirteen separate countries, with their own governments, laws, and currencies. It took bravery, smarts, and a lot of compromises to create a workable system of government under the new constitution.

Full of facts about our fledgling democracy, the call for a national government, and the Constitutional Convention, this book presents American history with personality, good humor, and energy.

▼▲
Jacqueline Jules is the author of several books for children, including ABRAHAM'S SEARCH FOR GOD (Kar-Ben) and THE ZIZ AND THE HANUKKAH MIRACLE (Kar-Ben). Her poetry has been featured in over sixty publications, including Cricket, Cicada, and The Christian Science Monitor. She lives in Arlington, Virginia.

▼▲
This presentation is written as if it were a school play about the 13 colonies becoming a nation. Told through colorful comic-book illustrations, it stars students dressed as states humorously explaining the path to the writing of the Constitution. The brief text is accompanied by speech balloons expressing the states’ multiple, often competing, views. Anecdotes such as Ben Franklin being a big talker, George Washington’s and Ben Franklin’s special chairs, and the secrecy of the meetings add interest and reveal the historical figures as being real people. Even then there were concerns about the press reporting on governmental procedures. The vividly colored spreads will hold the interest of even middle school students and would be useful to introduce how our form of government was created. Students will enjoy presenting this book as reader’s theater. Further information about the proceedings of the Continental Convention of 1787 is included in an afterword, and the notes section answers important questions not explained in the text. This is a great book to use along with Lane Smith’s John, Paul, George, and Ben.

▼▲
I'm the author/artist and I want to review Unite or Die: How Thirteen States Became a Nation.
Back
Back