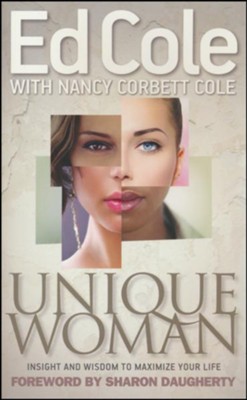 Unique Woman: Insight and Wisdom to Maximize Your Life

Unique Woman will help you to attain your full potential as a woman and start using the talents and gifts God gave you. Opportunities abound for women who have the courage to seize them. It is your responsibility to use the intelligence, talents, abilities, and gifts God has given you. Dig deeper with the corresponding workbook that follows the book chapter by chapter.

Edwin and Nancy Cole took the truths and experience gathered from over half a century of marriage and ministry together to write Unique Woman. In one of Christianity’s modern classics, the Coles furnish tools to achieve the image God holds for women. In the same upfront and honest style that made Ed Cole an internationally known minister to men, he learned with his wife Nancy, whom he called "The Loveliest Lady in the Land," to answer the heart’s cry of women around the world who said, "Write us a book!"

▼▲
Dr. Edwin Louis Cole (1922–2002),  known as "the father of the Christian men’s movement," was called by God to speak with a prophetic voice to the men of this generation. To that end, he founded the Christian Men’s Network, a ministry that majors in men and communicates the reality that manhood and Christlikeness are synonymous. A former pastor, evangelist, missionary, business executive, and denominational leader, Dr. Cole and his wife, Nancy, served the Lord together for more than fifty years. Over four million copies of his books are in circulation in more than forty languages, including his best-selling Maximized Manhood. Since his recent death, his legacy and his vision are being carried on by his "sons" in the faith as they reach tens of thousands of men each month via books, videos, and audiocassettes.

▼▲
In Unique Woman, Ed and Nancy speak to both single and married women. They bring out the balanced teaching of the marriage relationship and address topics such as submission, forgiveness, sex, stay-at-home moms, moms working outside of the home, seasons of life, myths about males and females, and how to be the fulfilled woman God planned for you to be. There is so much in this book that I believe you will refer back to, even after you have read it.
- Sharon Daugherty, Senior Pastor, Victory Christian Center, Tulsa, Oklahoma

▼▲
I'm the author/artist and I want to review Unique Woman: Insight and Wisdom to Maximize Your Life.
Back
×
Back
×