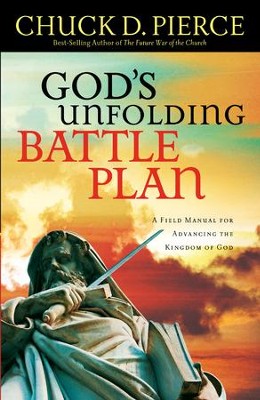 ▼▲
This new book from Chuck Pierce continues to empower Christians to face the exciting present (and future) for the church that he began to lay out in The Future War of the Church. Yes, we are in the midst of a battle that will only increase in strength, but the victory has already been promised. Outlining the next seven-year period of spiritual war, 2008-2015, Pierce shows how God will advance His kingdom, causing the faithful to rise up and God's will to be done here on earth as it is in heaven. God's Unfolding Battle Plan offers a glimpse into what's ahead, as well as encouragement to triumph over the attending forces of lawlessness, hopelessness, and violence. Discover what God has said to Pierce about the upcoming period and learn how to prosper through strategic intercession, worship warfare, and a powerful new weapon of intercession, the four watches of the night. Remain hopeful knowing you are a part of God's unfolding battle plan, and the best is still ahead.

▼▲
Chuck D. Pierce is president of Glory of Zion International Ministries and president of Global Spheres, Inc. in Corinth, Texas. He is known for his accurate prophetic gifting which helps direct nations, cities, churches and individuals in understanding the times and seasons in which we live. Chuck and his wife, Pam, have six children and eight grandchildren.

▼▲
I'm the author/artist and I want to review God's Unfolding Battle Plan: A Field Manual for Advancing the Kingdom of God - eBook.
Back
Back