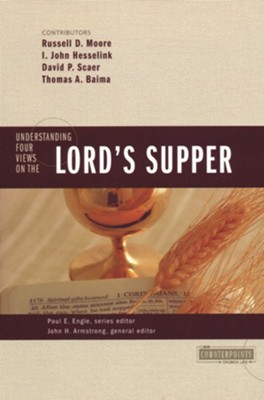 ▼▲
It's the central sacrament of the church---so why do various denominations view and practice communion so differently? Exploring the major positions on this important question, Armstrong looks at the beliefs of four respected contributors who defend their stands on memorialism (Baptist); spiritual presence (Reformed); consubstantiation (Lutheran); and transubstantiation (Roman Catholic). 208 pages, softcover from Zondervan.

The Lord's Supper has been the central and characteristic action of the church at worship. But there are still many ways of understanding it and many questions surrounding this meal...

Who should participate in the Lord’s Supper? How frequently should we observe it? What does this meal mean? What happens when we eat the bread and drink from the cup? What do Christians disagree about and what do they hold in common?

These and other questions are explored in this volume of the fair-minded, informative Counterpoints series. Contributors make a case for one of the following views:

All contributors use Scripture to present their views, and each responds to the others' essays. Included are resources for understanding the topic further, such as:

▼▲
John H. Armstrong is president of ACT 3 in Carol Stream, Illinois and served as a pastor for more than twenty years. He is an adjunct professor of evangelism at Wheaton College Graduate School. His online commentaries regularly appear at www.Act3online.com. He holds degrees from Wheaton College, Wheaton Graduate School, and Luther Rice Seminary. He is the author or editor of a number of books including The Catholic Mystery, Five Great Evangelists, Understanding Four Views on the Lord’s Supper, and Understanding Four Views on Baptism
Paul E. Engle, series editor for Counterpoints Church Life, is an ordained minister who served for twenty-two years in pastoral ministry in Pennsylvania, Connecticut, Illinois, and Michigan. He is an adjunct teacher in several seminaries in this country and internationally. He serves as associate publisher and executive editor in the Church, Academic, and Ministry Resources team at Zondervan. He and his wife Margie, live in Grand Rapids, Michigan.


Russell D. Moore is the President of the Southrn Baptist Ethics and Religious Liberty Commission. He also serves as the executive director of the Carl F. H. Henry Institute for Evangelical Engagement and is a regular columnist for Baptist Press. He has served on the pastoral staffs of two churches and was an aide to a United States congressman. He and his wife, Maria, and three sons live in Louisville, Kentucky.


I. John Hesselink is the former Albertus C. van Raalte professor of systematic theology at Western Theological Seminary in Holland, Michigan. He also served as president of Western Theological Seminary from 1973 to 1985. He has served in a wide variety of roles—evangelist, missionary, lecturer, translator, and administrator. He received his BA from Central College (Iowa), his BD from Western Theological Seminary (Michigan), and his doctorate in theology from the University of Basel (1961). He served as a missionary to Japan from 1953 to 1973, where he also taught systematic theology. He studied under both Emil Brunner and Karl Barth, completing his doctoral degree on the law in John Calvin for Professor Barth. His research in Calvin has gained him a reputation as a respected specialist in Calvin studies. His books include Calvin’s First Catechism: A Commentary and On Being Reformed. He has contributed to numerous academic and popular journals and magazines and taught historical theolo?
David P. Scaer is chairman of the department of systematic theology at Concordia Theological Seminary in Fort Wayne, Indiana. He serves as editor of Concordia Theological Quarterly and previously served as the academic dean at Concordia Theological Seminary. He and his wife, Dorothy, and their five children live in Fort Wayne, Indiana.
Thomas A. Baima is a priest of the archdiocese of Chicago and provost of the University of Saint Mary of the Lake/Mundelein Seminary, where he also teaches systematic theology. He was the director of the Office for Ecumenical and Interreligious Affairs for the archdiocese of Chicago and served as associate pastor in several parish ministries. His teaching and research interests are in the areas of ecclesiology, ecumenism, interreligious dialogue, and missiology. He lives in Mundelein, Illinois.

▼▲
I'm the author/artist and I want to review Understanding Four Views on the Lord's Supper.
Back
Back