The Underground Church: Reclaiming the Subversive Way of Jesus
By: Robin Meyers 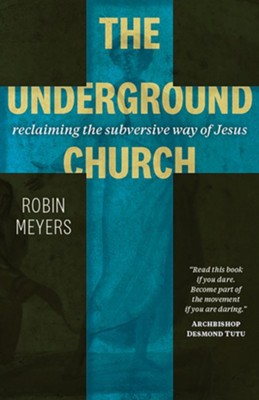 The Underground Church: Reclaiming the Subversive Way of Jesus

The Underground Church proposes that the faithful recapture the spirit of the early church with its emphasis on what Christians do rather than what they believe. Prominent progressive writer, speaker, and minister Robin Meyers proposes that the best way to recapture the spirit of the early Christian church is to recognize that Jesus-following was and must be again subversive in the best sense of the word because the gospel taken seriously turns the world upside down. No matter how the church may organize itself or worship, the defining characteristic of the church of the future will be its Jesus-inspired countercultural witness.

Meyers debunks commonly held beliefs about the early church and offers a vision for the future rooted in the past. He proposes that the church of the future must leave doctrinal tribalism behind and seek a unity of mission instead. Archbishop Emeritus Desmond Tutu says of this volume: "Robin Meyers has spoken truth to power, and the church he loves will never be the same."

Robin R. Meyers, PhD, has been senior minister of Mayflower Congregational UCC Church, Oklahoma City, for thirty-five years. He is Distinguished Professor of Social Justice Emeritus at Oklahoma City University, and the author of eight books on religion and culture, including the national bestseller, Saving Jesus from the Church, and the forthcoming title, Saving God from Religion. He is a columnist and a widely traveled lecturer on the merits of progressive Christianity, whose church is now the subject of an awarding-winning feature-length documentary entitled American Heretics: The Politics of the Gospel. He is married to Shawn Meyers, an artist and professor, and they have three children and three granddaughters.

▼▲
I'm the author/artist and I want to review The Underground Church: Reclaiming the Subversive Way of Jesus.
Back
×