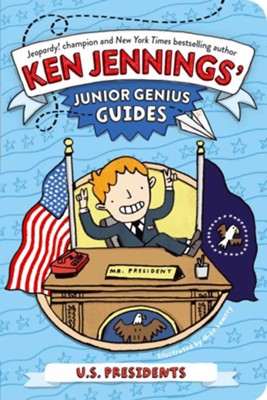 ▼▲
Ken Jennings' "Junior Genius Guide: US Presidents" will introduce students to facts that will wow parents, teachers, and friends! Chapters cover the office of president, the White House, the presidential motorcade, pets, first ladies, random stories and all sorts of other cool facts and trivia in addition to illustrated fact-columns about each president. 160 pages, hardcover with dust jacket. Please Note: Some quotes contain (scratched-out but still legible) swear words.

With this book about U.S. Presidents, you’ll become an expert and wow your friends and teachers with clever facts: Did you know that Abraham Lincoln made Thanksgiving a national holiday? Or that Jefferson introduced the first French fries at a fancy state dinner? With great illustrations, cool trivia, and fun quizzes to test your knowledge, this patriotic genius guide will have you on your way to whiz-kid status in no time!

▼▲
Ken Jennings grew up in Seoul, South Korea, where he became a daily devotee of the quiz show Jeopardy! In 2004, he successfully auditioned for a spot on the show and went on an unprecedented seventy-four game victory streak worth $2.52 million. Jennings’s book Brainiac, about his Jeopardy! adventures, was a critically acclaimed New York Times bestseller, as were his follow-up books Maphead and Because I Said So! He is also the author of Planet Funny. Jennings lives in Seattle with his wife Mindy and two children.

Mike Lowery is an illustrator and fine artist whose work has been seen in galleries and publications internationally. Mike is the illustrator of Moo Hoo and Ribbit Rabbit by Candace Ryan; The Gingerbread Man Loose in the School by Laura Murray; and the Doctor Proctor’s Fart Powder novels by Jo Nesb&oslash;. Currently he is a professor of illustration at the Savannah College of Art and Design in Atlanta, Georgia, where he lives with a lovely German frau, Katrin, and his super genius daughter, Allister. Visit him at MikeLowery.com.

▼▲
I'm the author/artist and I want to review U.S. Presidents.
Back
×