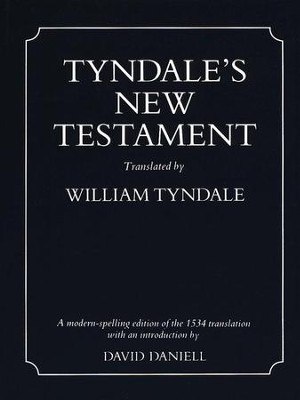 William Tyndale's 1534 translation of the New Testament into English from the original Greek ultimately led to his being hunted down and burnt at the stake for blasphemy. This astounding work of pioneering scholarship formed the basis of subsequent English Bibles until after the Second World War and was the version of the Bible used by some of our greatest poets. By the twentieth century, however, it had become virtually unknown because of its suppression for political reasons and its difficult sixteenth-century spelling. This edition-published in modern spelling, as the modern book it once was-makes this masterly work of English prose by one of the greatest geniuses of the age accessible to today's reader.

▼▲
This translation of the New Testament into English from its original Greek was printed in Germany in 1534 and smuggled back into England. It therefore escaped the fate of Tyndale’s previous version, which had been seized and publicly burnt by the authorities. The 1534 edition outraged the clerical establishment by giving the laity access to the word of God, in print in English for the first time. Tyndale, who was already in exile for political reasons, was hunted down and subsequently burned at the stake for blasphemy.
For the next eighty years—the years of Shakespeare among others—Tyndale’s masterly translation formed the basis of all English bibles. And when the authorized King James Bible was published in 1611, many of its finest passages were taken unchanged, though unacknowledged, from Tyndale’s work.
Although, therefore, this astounding work of pioneering scholarship was the basis of all subsequent English bibles until after the Second World War, and though it was the version of the Bible used by some of our greatest poets, it is today virtually unknown because of its suppression for political reasons because of its difficult early sixteenth-century spelling.
Now for the first time this version is published in modern spelling, as the modern book it once was, so that this masterly work of English prose by one of the great geniuses of the as is available to today’s reader.

"Amid the plethora of contemporary English translations, Tyndale's still stands out as powerfully and vigorously attractive."—ADRIS Newsletter

"Yale's splendid reprint of the definitive 1534 Tyndale NT consists of the following:  a fascinating 36-page introduction, a short glossary of really difficult terms . . . 429 pages consisting of two introductions by Tyndale himself, the complete text of the 1534 NT in modern spelling and Roman type (easy to read!), Tyndale's prologues to the books, his marginal notes, a selection of readings of the church year from the OT (showing Tyndale's great skill with Hebrew and poetry), a table of Epistles and Gospels, and finally a page of explanations of words such as Gehenna, 'added to fill up the leaf withal.' Quite a volume. . . . No better way exists to show how correct Daniell's evaluation is than to compare Tyndale, King James, and the New King James to demonstrate how much of his work is still current. The archaic spelling is retained for historical interest. (It also shows the need for this Yale reprint in modern spelling!)."—Arthur L. Farstad, Journal of the Grace Evangelical Society

"[This] handsome new edition is especially welcome, since it refocuses the attention of both scholars and the general Christian public on the magnificent but often neglected contribution of Tyndale to the English Bible. . . . An informative and appreciative introduction in which he fixes the place of Tyndale's work in the chain that ended with the AV (KJV), and extols its distinctive merits. . . . We owe a debt to Daniell for his description of the format of the 1534 edition and also for his summary of the supplementary contents: the new preface with the prologue to the Gospels, the second preface, and the prologues to the Epistles, in which Daniell rightly stresses not only the dependence on Luther but also the differences from him. He offers us, too, a valuable discussion of Tyndale's competence in the original languages (often contested)."—Geoffrey W. Bromiley, Anglican and Episcopal History

"The achievement of Tyndale was staggering, to be summed up in three points. Firstly, though there had been an English version of the Bible beforehand, stemming from Wyclif, this had been from the Latin Vulgate; Tyndale was the first to press the revival classical learning into service by translating from the original Greek—and, in his incomplete Old Testament, from the Hebrew. Secondly, his version was, unacknowledged, the basis of the Authorised Version, and so of all modern English translations. . . . Thirdly, his sheer brilliance as a translator is thrilling. . . . But the flow and attractiveness of his version is universally winning, in a way that only one who has struggled with the problems of translation can fully appreciate."—Henry Wansbrough, Catholic Herald

"The work is a welcome contribution to historical scholarship."—Harvey Minkoff, Bible Review

"The best buy of the year. . . . It is beautifully printed, sewn with a ribbon marker, and Daniell provides a spirited Introduction, giving Tyndale praise usually accorded 'the 1611 Authorised Version'. Daniell is at his best giving vent to justified loathing for the wretched mistranslation and worse prose of the Revised Standard Version, the New English Bible, and the Good News Bible."—Stanley Stewart, Studies in English Literature

"Handsomely printed and bound edition. . . . One is grateful to Daniell for . . . making this historically significant work available to modern readers. A significant purchase for all libraries and all students of the English Bible."—Bart Ehrman, Religious Studies Review

"This publication of Tyndale is the first time ever that this classic version has been published in modern spelling. Consequently this masterly work of English prose by one of the great geniuses of the age is finally available to today's reader. The binding and format are suitably handsome and the price remarkably reasonable."—Gerald Studer, Bible Collector's World

"In reading the text of Tyndale's translation, the reader is gripped and held by its clearness and relevance which is sometimes lacking in modern versions."—Ralph S. Werrell, Sixteenth Century Journal

▼▲
I'm the author/artist and I want to review Tyndale's New Testament, softcover.
Back
Back