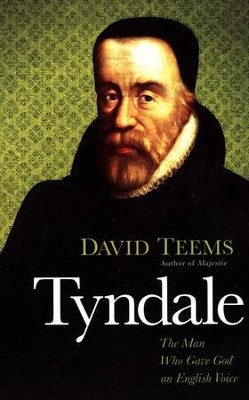 Tyndale: The Man Who Gave God an English Voice

▼▲
A beautiful literary tribute to the poet, martyr, expatriate, outlaw, and original translator of the English Bible. In this personable, historical narrative, Teems brings wit and wisdom to the story of the English "Paul" who defied a tyrannical church in order to introduce God's Word to the common people. 304 pages, softcover from Nelson.

It was an outlawed book, a text so dangerous “it could only be countered by the most vicious burnings, of books and men and women.” But what book could incite such violence and bloodshed? The year is 1526. It is the age of Henry VIII and his tragic Anne Boleyn, of Martin Luther and Thomas More. The times are treacherous. The Catholic Church controls almost every aspect of English life, including access to the very Word of God. And the church will do anything to keep it that way.

Enter William Tyndale, the gifted, courageous “heretic” who dared translate the Word of God into English. He worked in secret, in exile, in peril, always on the move. Neither England nor the English language would ever be the same again.

With thoughtful clarity and a reverence that comes through on every page, David Teems shares a story of intrigue and atrocity, betrayal and perseverance. This is how the Reformation officially reached English shores—and what it cost the men who brought it there.

“Teems . . . pulls together the story of this enigmatic king [ James] with humor and pathos . . . [A] delightful read in every way.” —PUBLISHERS WEEKLY

▼▲
Recording artist, songwriter, and speaker,David Teemsis the author of Tyndale: The ManWho Gave God an English Voice , Majestie:The King Behind the King James Bible , ToLove is Christ , Discovering YourSpiritual Center , and And TherebyHangs a Tale . Teems earned his BA in Psychology at Georgia StateUniversity. David and his wife Benita live in Franklin, Tennessee near theirsons Adam and Shad.

▼▲
I'm the author/artist and I want to review Tyndale: The Man Who Gave God an English Voice.
Back
×
Back
×