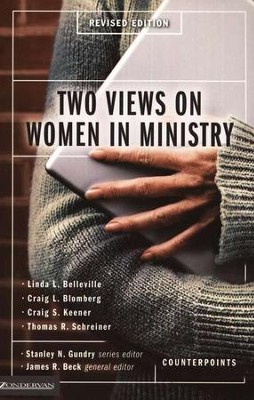 ▼▲
What does the Bible say about the role of women in the church? With pros and cons on either side of a heated, ongoing debate, no definitive conclusions have emerged. The purpose of this book is to furnish concerned readers with a clear and thorough presentation of the two primary views on women in the ministry so they can better understand each one's strengths, weaknesses, and complexities.
Each view is represented by two contributors followed by a brief question-and-answer section. The general editor adds a commentary at the conclusion of both the egalitarian (equal ministry opportunity for both genders) and complementarian (ministry roles differentiated by gender) views.

What does the Bible say about women’s roles in the church? With pros and cons on either side of a heated, ongoing debate, no definitive conclusions have emerged. This book furnishes you with a clear and thorough presentation of the two primary views on women in ministry so you can better understand each one’s strengths, weaknesses, and complexities. Each view—egalitarian (equal ministry opportunity for both genders) and complementarian (ministry roles differentiated by gender)—is represented by two contributors. This revised edition of the book brings the exchange of ideas and perspectives into the traditional Counterpoints format. Each author states his or her case and is then critiqued by the other contributors. The fair-minded, interactive Counterpoints forum allows you to compare and contrast the two different positions, and to form your own opinion concerning the practical and often deeply personal issue of women in ministry. The Counterpoints series provides a forum for comparison and critique of different views on issues important to Christians. Counterpoints books address two categories: Church Life and Bible and Theology. Complete your library with other books in the Counterpoints series.

James R. Beck is professor of counseling at Denver Seminary and the author of many books, including Jesus and Personality Theory: Exploring the Five Factor Model. The essays are contributed by Thomas R. Schreiner, Linda L. Belleville, Craig S. Keener, and Craig L. Blomberg. Dr. Linda Belleville is Professor of New Testament at Bethel College and Graduate School in Mishawaka, IN.

Craig L. Blomberg (PhD, Aberdeen) is distinguished professor of New Testament at Denver Seminary. He is the author, co-author, or co-editor of numerous books and more than 130 articles in journals or multi-author works. A recurring topic of interest in his writings is the historical reliability of the Scriptures. Craig and his wife Fran have two daughters and reside in Centennial, Colorado.

Craig S. Keener is professor of New Testament at Asbury Theological Seminary and holds a doctoral degree in New Testament Studies and the Origins of Christianity from Duke University. He is the author of several commentaries on books of the New Testament.

These antithetical statements come from the two authors representing the complementarian view in “Two Views on Women in Ministry,” a new book in Stanley N. Gundry’s “Counterpoints” series.

“Two Views” provides an interesting overview of the issues surrounding the current debate on a woman’s place in the church. The book’s co-editors introduce themselves as a hierarchicalist (Craig Blomberg) and an egalitarian (James Beck), “though each . . . would generally find more in common with relatively centrist perspectives on the other side than with extremists in his own camp” (p. 20). In the book’s introduction, the editors call for “a new (or renewed) commitment to an irenic spirit in this debate.”

Craig Keener and Linda Belleville write the egalitarian essays. Both provide clear biblical support for their views. Keener gives an overview of the many places in Scripture where women served in various capacities, including apostle (Junia). He also reminds us of the need to carefully distinguish between transcultural mandates (easily applied to any culture) and culture-specific ones.

Belleville contributes some valuable material in her discussion of the general nature of authority in the church, showing from Scripture that “it is the church that possesses authority and not particular individuals (or positions, for that matter)” (p. 106). In pages 130-139, Belleville answers well all six questions from Wayne Grudem’s “An Open Letter to Egalitarians” (Journal for Biblical Manhood and Womanhood, March 1998: 1, 3-4).

Complementarian Thomas Schreiner begins his essay by reminding us that the church has a long history of defining women’s roles in a certain way. He then proceeds to respectfully focus on the “dignity and significance of women” (pp. 183-188), followed by a section outlining many of the ways women ministered throughout Scripture. Then, explaining the difficult passages on women by building on the idea of a “creation order,” Schreiner concludes that women should not teach or exercise authority over men, choosing to explicitly apply this statement only to the pastoral office.

Ann Bowman’s essay seemed inconsistent, as I read page after page of what appeared at times like egalitarian thought and at times like a general handbook for anyone entering the ministry, having little to do with the topic of the book. Her support of male authority seemed out of step with much of her argument, and her conclusion that women should not serve as senior pastors made the essay even more bewildering!

An egalitarian myself, I admit the possibility of reading my own bias into this book, but I did finish disappointed. The format of the book places the egalitarian essays first, followed by the complementarian essays. The last part of the book is an appendix written by Craig Blomberg, entitled “Neither Hierarchicalist Nor Egalitarian.” The editors believe this represents a third viewpoint, one that maintains a woman may serve in any capacity except that of senior pastor. Blomberg, however, along with Schreiner and Bowman, heavily employs the idea of fundamental female subordination (a “creation order”) to support his case. This seems to fall quite naturally in line with the complementarian view. The end result is that complementarianism gets the last word, and in disproportion to the two essays written by the egalitarians.

Disappointment notwithstanding, I recommend this book to those wanting a good overview of the issues involved in the current debate on women in ministry, specifically in the context of evangelicalism.

Academic in its approach, it is readable enough for the average layperson; and its call for respectful dialogue between those of different viewpoints is admirable, especially to a former “fighting fundamentalist” preacher’s kid like me.

---Julia Bloom
---Used with permission from Christians for Biblical Equality

▼▲
I'm the author/artist and I want to review Two Views on Women in Ministry, Revised.
Back
Back