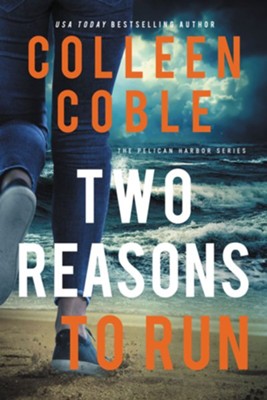 Jane Hardy's life has been utterly disrupted. Almost immediately after taking over as Chief of Police for Pelican Harbor, her department was rocked by scandel. For the first time in her adult life, Jane thought she was falling in love... until she discovered that Reid had been hiding the truth about who he really was. And if that wasnt enough already, she learned her father had been lying to her most of her life.

Lies have already rocked Jane Hardy’s world. So when a killer sets sights on her son, she has plenty of reasons to run.

Police Chief Jane Hardy is still reeling from the scandal that rocked her small-town department just as she took over for her retired father—the man who wrecked her life with one little lie. Now that she’s reunited with her presumed-dead fifteen-year-old son, Will, and his father, documentarian Reid Bechtol, Jane barely has time to catch her breath before the next crisis hits Pelican Harbor.

When a murder aboard the oil platform Zeus exposes an environmental terrorist’s plot to flood Mobile Bay with crude oil, Jane and Reid must put their feelings for each other behind them and work together to prevent the rig from being sabotaged. Who is behind the crime, and why? Unable to convince Homeland Security that the threat is real, they struggle to make progress on the investigation.

Then the terrorist puts Will’s life on the line. Protecting their son could be the common ground they need . . . but then ghosts from the past threaten to ruin Jane and Reid for good.

▼▲
I'm the author/artist and I want to review Two Reasons to Run.
Back
×