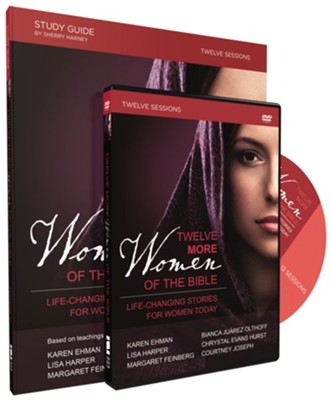 Twelve More Women of the Bible Study Guide with DVD

In this 12-session video Bible study, some of today's best-loved authors and speakers look at the spiritual lessons learned from twelve biblical women and what they mean for today's women. This Study Guide Pack includes a DVD with 12 video lessons and one copy of the accompanying study guide. Additional study guides can be purchased separately.

You’ll Study the Lives Of…

In this twelve-session video Bible study, some of today’s best-loved authors and speakers look at the spiritual lessons learned from twelve women in the Bible and what they mean for you today. As you look at each of these women’s lives, you will discover how to:

This fresh look at these women in the Bible will help you discover new insights into God’s character, persevere through difficult times, and find joy in the hope that Jesus has provided to you. This study guide includes background information on each woman, group discussion questions, Bible exploration, and personal study and reflection materials for in-between sessions.

This pack includes one DVD and one study guide.

▼▲
Lisa Harper is a hilarious storyteller and theological scholar—a gifted communicator whose writing and speaking overflows with colorful, pop-culture references that connect the dots between the Bible era and modern life. Her God-given ability to not merely teach the Word but package it in a way that stirs the heart and calls to action is incomparable. For six years Lisa served as the director of Focus on the Family's national women's ministry where she created the popular Renewing the Heart conferences. The next six years foundher serving on the local level as the women's ministry director at a large church in Nashville. As the author of nine books, and a Masters of Theological Studies with honors from Covenant Seminary, she is now a sought-after Bible teacher and speaker currently featured on the Women of Faith®< sup> tour.

Karen Ehman is a Proverbs 31 Ministries speaker, a New York Times bestselling author, and a writer for First 5, a Bible study app that reaches over 2 million people daily. She has written thirteen books including Let. It. Go., Keep It Shut, and Pressing Pause. Her passion is to help women to live their priorities as they reflect the gospel to a watching world. Married to her college sweetheart, Todd, and the mother of three, she enjoys antique hunting, cheering for the Detroit Tigers, and feeding the many people who gather around her kitchen island for a taste of Mama Karen's cooking. Connect with her at www.karenehman.com

Chrystal Evans Hurst is the bestselling author of She’s Still There and coauthored Kingdom Woman with her father, Dr. Tony Evans. She reaches millions of women each year speaking at conferences, sharing on her blog and podcast, writing for Proverbs 31 Ministries, and by teaching and leading women in her home church. She has served as keynote for the Desperate for Jesus Women’s Conference, Women of Joy and is also on the Proverbs 31 Speaker Team Roster. In addition to her work in ministry, Chrystal works at home as the COO (Chief Operating Officer) of the Hurst household, cultivating hearts and commanding chaos. She is a mother of five and homeschools three boys around the kitchen table while hugging two adult girls, a son-in-love, and two grandchildren every chance she gets. Chrystal is grateful to share her life with her husband Jessie. Keep up with Chrystal and her journey at ChrystalEvansHurst.com.

Bianca Juarez Olthoff is a bible-teaching, word-slanging MexiRican who is passionate about raising up a generation of people passionate about Jesus Christ. As an author and speaker, she knows the power of words and wields them wisely. As a church planter and leader, she is committed to proclaiming the gospel domestically and internationally.

For more information, follow along on social media or visit BiancaOlthoff.com.

Margaret Feinberg, one of America’s most beloved Bible teachers, speaks at churches and leading conferences including Catalyst, Thrive, and Women of Joy. Her books, including Wonderstruck, Fight Back With Joy, and Scouting the Divine and their corresponding Bible studies, have sold more than one million copies and received critical acclaim and national media coverage from CNN, Associated Press, USA Today, Los Angeles Times, Washington Post, and more. She was named one of fifty women most shaping culture and the church today by Christianity Today. Margaret savors life with her husband, Leif, a pastor in Park City, Utah, and their superpup, Hershey.

▼▲
I'm the author/artist and I want to review Twelve More Women of the Bible Study Guide with DVD.
Back
×
Back
×