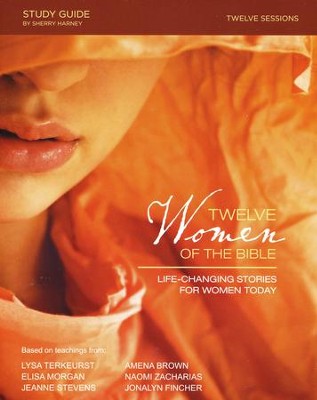 In this 12-session small group Bible study, Twelve Women of the Bible, Lysa TerKuerst, Elisa Morgan, Jeanne Stevens and others look at the spiritual lessons learned from twelve biblical women and their implications in life today. Now revised and expanded in a larger format from the original for easier note taking and deeper study of the Bible's most empowered and iconic women.

The Participant Guide features discussion questions, background information on each character, space to write down thoughts, and a helpful Leader's Guide. Revised and expanded in a larger format from the original for easier note taking and deeper study of the Bible's most empowered and icononc women.

Don’t you just love authentic people? Aren’t you drawn to women who are transparent and real? There is something fresh and wonderful about women who have nothing to hide and who are not ashamed about who they are . . . even the tough parts.

In this twelve-session small group journey, taught by six acclaimed Bible teachers, you will meet a group of amazing women in the Bible who are absolutely real. At first you might wonder why God captured these particular stories in the Bible. But, as you press on, you will discover that their raw and revealing stories of frailties, struggles, sins and brokenness are a real gift to women today.

You’ll discover lessons from each of these women that will help you persevere through the circumstances you are facing. Learn how to:

Their stories are not fairytales, their road was not easy, and their examples are not perfect. They lived in times and places quite different than ours. Yet they hold up a mirror to our souls that can help us better understand our own story. And in doing so, we find freedom to come to God as we are, with total transparency, honest and real.

Lysa TerKeurst is president of Proverbs 31 Ministries and the author of more than twenty-five books, including It's Not Supposed to Be This Way and the #1 New York Times bestsellers Forgiving What You Can't Forget and Uninvited. She writes from her family's farm table and lives in North Carolina. Connect with her at www.LysaTerKeurst.com or on social media @LysaTerKeurst.

Elisa Morgan is President Emerita of MOPS International, Inc., based in Denver, Colorado. She is the author, editor, or coauthor of numerous books, including Twinkle, Naked Fruit; Mom, You Make a Difference! Mom’s Devotional Bible; What Every Mom Needs; What Every Child Needs; and Real Moms. Elisa has two children, and a grandchild, and lives with her husband, Evan, in Centennial , Colorado.

Amena Brown is an author, spoken word poet, speaker, and event host. The author of five spoken word albums and two non-fiction books, Amena performs and speaks at events from coffeehouses to arenas with a mix of poetry, humor, and storytelling. She and her husband, DJ Opdiggy, reside in Atlanta, GA.

Jonalyn Grace Fincher offers a distinctive voice as a female apologist. Holding a master's degree in philosophy of religion and ethics from Talbot School of Theology, as well as double bachelor's degrees in English and history from the University of Virginia, she is one half of Soulation (www.soulation.org), a husband/wife apologetics team. For the last three years Jonalyn has been lecturing, speaking and writing on how women are distinctly and fully made in God’s image. Her work has appeared in Radiant, Fullfill and UnChristian: What a New Generation Really Thinks about Christianity. She regularly updates her blog (www.jonalynfincher.com) sharing her insights about womanhood and the soul. Jonalyn and Dale love to take walks with their three Welsh Corgis in their new hometown of Steamboat Springs, Colorado. Jeanne Stevens serves as one of the lead pastors at Soul City Church in Chicago, IL (www.soulcitychurch.com) Before starting Soul City Church Jeanne has been blessed to work with 2 amazing churches. Jeanne was on staff at Willow Creek Community Church from 1995 to 2005 where she served as a Student Ministry Pastor. She was also in leadership at North Point Community Church in Atlanta, GA from 2006 ­ 2009. Jeanne has been privileged to be able to write, consult, and train ministry leaders throughout the country. Jeanne is an engaging communicator and leader that is committed to helping people live and lead from their soul. Jeanne is the author of Soul School and the soon to be released book, What lies beneath. Jeanne's greatest joy is her marriage and mothering - she has been married to Jarrett for 14 years, they have a 4-year-old son named Elijah William and a 2 year-old daughter named Genevieve Grace "Gigi². Naomi Zacharias graduated from Wheaton College. After working in sales for Coca-Cola, she joined RZIM and launched Wellspring International, an initiative devoted to providing financial grants to international efforts working with at-risk women and children. Naomi has spent time in red-light districts in The Netherlands, India, and Thailand; foster homes for children affected by HIV/AIDS throughout Asia; hospitals providing surgical treatment for women who have been victims of violence in the Congo; women’s prisons in South Africa; displacement camps in Indonesia, Uganda and Pakistan; areas of the Middle East offering aid to Iraqi refugees; and areas of Southeast Asia devastated by the tsunami of 2004. Naomi recently met and married her husband, Drew, in Florence, Italy. They currently live in Oxford, England.

Sherry Harney is an author and a speaker who serves as the Spiritual Formation and Discipleship Director at Shoreline Church in Monterey, California. She is also the cofounder of Organic Outreach International. For over three decades Sherry has spoken for local, national, and international groups and events. She focuses on prayer, spiritual formation, leadership, and organic outreach.

▼▲
I'm the author/artist and I want to review Twelve Women of the Bible: Life-Changing Stories for Women Today, Study Guide.
Back
Back