Time for Truth: Living Free in a World of Lies, Hype, and Spin
By: Os Guinness 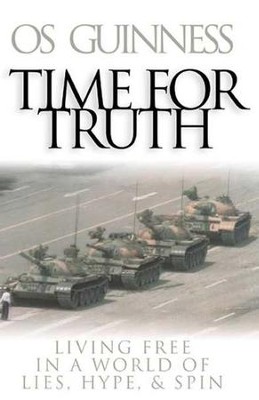 Time for Truth: Living Free in a World of Lies, Hype, and Spin

▼▲
Is there such a thing as absolute truth? Many postmodern academics say "no"---treating it as a relative concept or merely a matter of human convention. Guinness begs to differ! Find out why he believes the truth is not only alive and well, but vital to our freedom, personal responsibility, moral integrity, and a meaningful life. 128 pages, softcover from Baker.

▼▲
In postmodern society, truth no longer exists in any objective or absolute sense. At best, truth is considered relative. At worst, it's a matter of human convention. But, as Os Guinness points out in this book, truth is a vital requirement for freedom and a good life.
Time for Truth urges readers to seek the truth, speak the truth, and live the truth. Guinness shows that becoming free and truthful people is the deepest secret of integrity and the highest form of taking responsibility for ourselves and our lives. Now in paperback, this engaging book will interest Os Guinness fans, thoughtful readers, and those concerned with moral, political, and cultural issues.

▼▲
Os Guinness is an internationally known speaker and the author and editor of numerous books, including Invitation to the Classics and The Long Journey Home. He is currently senior fellow of the Trinity Forum in McLean, Virginia.

▼▲
Beloved Christian writer Guinness here bemoans current-day relativism and pleads with his readers to recognize the value of truth. We live in a new order, Guinness writes, in which "truth is dead and knowledge is only power." But this new creed will not bring about the utopia its postmodern boosters imagine. To the contrary, he contends, postmodernity, along with its cousin multiculturalism, may be the worst tragedy in all American history: if unchecked, it will end America's leadership of the West. (Clinton, "the first postmodern president," comes in for special opprobrium.) Guinness, however, is no fan of modernity, which, he says, relies too much on human reason. In place of either modernity or postmodernity, he encourages embracing the traditional religious worldview provided by Judaism and Christianity. Guinness is a lucid writer, and he presents his ideas without too much bombast (although his defense of faith is marred by a certain pro-American chauvinism). The ideas themselves are old news--which is precisely what Guinness likes about them. Unfortunately, he does not have the masterful gifts for apology of, say, G. K. Chesterton or Cornelius Van Til. In the end, even the reader who agrees with Guinness may feel that he sounds like an out-of-date grandfather arguing a case that has already been lost, with interlocutors who have already moved on to another conversation. (Feb.) Copyright 2000 Cahners Business Information.

▼▲
I'm the author/artist and I want to review Time for Truth: Living Free in a World of Lies, Hype, and Spin.
Back
×