Skip to main content
Truth About Men
By: Devon Franklin
Stock No: WW2101275 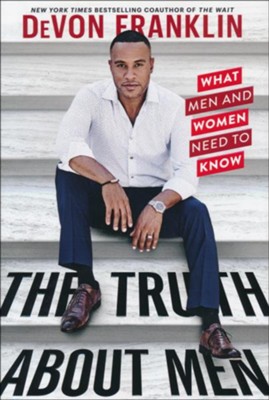 We hear it all the time. Men cheat. Men love power. Men love sex. Men are greedy. Men are dogs. But is this the truth about men?

In this groundbreaking book, DeVon Franklin dishes the real Truth About Men by making the compelling case that men aren’t dogs but all men share the same struggle. He uses the metaphor of a dog that needs training as a way to explore why behavior persists in men that can lead them to act against their vows, their integrity and even their character.

DeVon provides the manual for how men can change, both on a personal and a societal level, by providing practical solutions for helping men learn how to resist temptation, how to practice self-control and how to love. He argues the same discipline that drives men in their professional lives needs to be applied to their private lives. DeVon is also transparent about the challenges he faces daily as he endeavors to "Master the Dog" within.

▼▲
DeVon Franklin is an award&shy;-winning film & TV producer, bestselling author, renowned preacher, and spiritual success coach. DeVon is the ultimate multi-hyphenate. With a commitment to uplifting the masses through entertainment, Franklin has quickly become a force in the media as well as a leading authority on faith, spiritual wellness, and personal development. Beliefnet has called him one of the "Most Influential Christians Under 40," Variety named him one of the "Top 10 Producers to Watch," Ebony has distinguished him as one of the "Top 100 Influential African Americans in America," and even Oprah has called him "a bonafide dynamo...a different kind of spiritual teacher for our times." Franklin serves as President/CEO of Franklin Entertainment, a dynamic multimedia entertainment company with a first-look film deal at 20th Century Fox. As a filmmaker, Franklin is producing the inspirational true story Breakthrough starring Chrissy Metz in theaters Easter of 2020. Additionally, he produced the hit animated film The Star and the hit film Miracles from Heaven. Along with his work as a producer, Franklin is the author of The Truth About Men, as well as The Hollywood Commandments, New York Times bestseller The Wait (cowritten with his wife, award-winning actress Meagan Good), and Produced by Faith.

The Truth About Men isn’t just for men. DeVon tells female readers everything they need to know about men. He offers women a real-time understanding of how men’s struggle effects them, insights that can help them navigate their relationships with men and information on how to heal from the damage that some misbehaving men may have inflicted.

This book is a raw, informative, and compelling look at an issue that threatens to tear our society apart yet it offers a positive way forward for men and women alike.

"In the 20 years I’ve known DeVon, he’s lived his life the same way he makes his movies: with commitment, humility, and a work ethic that demands respect." —Will Smith
"DeVon’s message is for anyone seeking to strike that quintessential balance between faith and function. Hollywood, like life, is a walk of faith." —T.D. Jakes
"DeVon Franklin is a bona fide dynamo... a different kind of spiritual leader for our times." —Oprah Winfrey

▼▲
I'm the author/artist and I want to review Truth About Men.
Back
Back