Skip to main content
OUR BIGGEST BARGAIN SALE EVER: Over 6,000 deals at never-seen-before prices ~ through 8/23. Shop now >
True Story of Noah's Ark, The - PDF Download [Download]
By: Tom Dooley
Illustrated By: Bill Looney
Stock No: WW22614DF 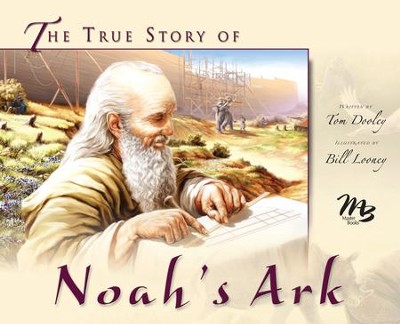 One of the most stunning, unique and captivating books on the account of the Ark and the global Flood of Noah's day ever produced. Based on the account recorded in Genesis 6-9 in the Bible, the narrative is true to the biblical record and its timeline of events concerning Noah and the Great Flood, with added insight as to what it might have been like to be in Noah's shoes.

The thrilling adventure of Noah comes to life through the dazzling, detailed illustrations by Bill Looney in the exciting True Story of Noah’s Ark. The images of the interior of Noah’s ark are like nothing you’ve ever seen before. The people and cities depicted here are certainly more advanced than what you’ve been led to believe And this is not fiction - it’s all biblically and historically based.

This book is not just material for Ministry to Children, but can also be used as an excellent Evangelical tool because it comes directly from the multi-media presentation of author Tom Dooley, who uses it to witness to multitudes of people across America every week. This dramatic and exciting retelling of a timeless Bible story is an excellent resource and should have a place in every Church Library.

Tom Dooley is one of the nation’s top music radio personalities and his career spans more than 25 years. Gifted with an impressive voice and narrative ability, Tom is a top "voice-over" talent. His career began in Christian radio at WFIL Philadelphia with the Sunday morning show, "Alpha Omega." That program evolved into what is now "The Journey" which Tom hosts six days a week from KVTT Dallas.

Tom has narrated countless documentaries and his list of commercials includes clients like Radio Shack, Zales Jewlers, GE and many more. He also served as the official voice of the Billy Graham Evangelistic Association, narrating many of Dr. Graham’s national television specials and several books on tape. Tom and his wife, Melanie, have been married 30 years and have three grown children. They live in Colleyville, Texas with their boxers, Bugsy and Abby.

Bill Looney was formally schooled in all media beginning in public school, to The University of Texas at Arlington, Dallas Art Institute and finally entered the arena of professional commercial art and illustration in the early '70s. Bill is proficient in all media, ranging from airbrush, oils, acrylics, pen & ink, watercolor, sculpture, and computer illustration. Most recently, Bill's artwork has been published in many books including The True Story of Noah's Ark and America's Lost Dream (New Leaf Press).

▼▲
I'm the author/artist and I want to review True Story of Noah's Ark, The - PDF Download [Download].
Back