Skip to main content
True Story about the Sign of Jonah
By: Everett W. Purcell
Stock No: WW662490 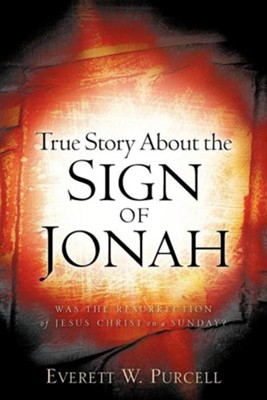 ▼▲
This book shows that the Traditional View for Easter (Palm Sunday, the Friday crucifixion and the Sunday morning resurrection) is not scriptural. Our derivation, for what really happened to Jesus, requires an understanding of the Hebrew calendar which is derived from the book of Exodus. This calendar is based on the moon and has all its days start just after sunset. The Hebrew calendar establishes all the rules for naming the weeks, celebrating the festivals, etc. Jesus was crucified on the Preparation Day, and was entombed during the Passover, on the spices and perfume Preparation Day and during the regular Jewish Sabbath. This is three days and three nights just as Jesus prophesied numerous times. The Easter festival was establish with a Greek calendar much later and can never explain the sign of Jonah. Everett is by training and experience an Aerospace Engineer but his background is much broader than that. He has Degrees in Electrical Engineering, Aerospace Engineering, Mathematics and Theology. He has taught school at three Universities and worked for three different Aerospace companies where he learned about computers, missiles and education. When he retired from Aeronutronic-Ford, he attended Seminary at Talbot Theological Seminary where he studied Biblical languages and Theology because he was interested in reading the Bible in its original languages. He became interested in the theological problems related to the Sign of Jonah and the celebration of Easter. This book is the result of these two later researches. He is thankful for this opportunity to serve and to honor Jesus Christ in clarifying the confusing problems that were discussed there.

▼▲
I'm the author/artist and I want to review True Story about the Sign of Jonah.
Back