Skip to main content
Troubled Waters #4
By: Susan May Warren
Stock No: WW727463 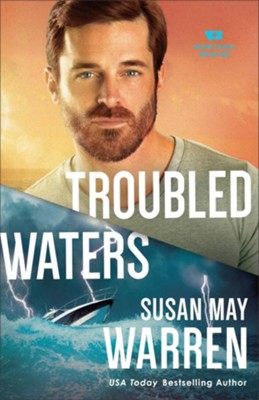 Ian Shaw is a billionaire whose fortune was recently liquidated, his niece, Esme is still missing and Sierra Rose, the love of his life, refuses to talk to him. Sierra Rose made a promise to Esme to keep her whereabouts a secret. How can she talk with Ian without telling him about his niece? When the PEAK chopper gets damaged, Ian tries to help and holds a three-day excursion on his yacht as a fundraiser to entice large donors. A rogue wave damages the yacht and they end up on a deserted island. The PEAK team must find them and bring them to safety.

▼▲
Billionaire Ian Shaw can have everything he wants--except a happy ending. Or at least that's what it feels like with his fortune recently liquidated, his niece, Esme, still missing, and the woman he loves refusing to speak to him. In fact, he doubts she would date him even if they were stranded on a deserted island.

Despite her love for Ian, Sierra Rose knows he has no room in his life for her as long as the mystery of his missing niece goes unsolved. The only problem is, Sierra has solved it, but a promise to Esme to keep her whereabouts secret has made it impossible to be around Ian.

When the PEAK chopper is damaged and Sierra lacks the funds to repair it, Ian offers a fundraising junket for large donors on his yacht in the Caribbean. But the three-day excursion turns into a nightmare when a rogue wave cripples the yacht and sends the passengers overboard. Shaken up and soaked to the bone, Ian finally has a chance to test his theory when he and Sierra do indeed find themselves washed up on a strange, empty shore.

It will take guts and gumption for the PEAK team to rescue the duo. But it will take a miracle to rescue Ian and Sierra's relationship.

▼▲
Susan May Warren is the USA Today bestselling author of over fifty novels with more than 1 million books sold, including Wild Montana Skies, Rescue Me, and A Matter of Trust. Winner of a RITA Award and multiple Christy and Carol Awards, as well as the HOLT and numerous Readers' Choice Awards, Susan has written contemporary and historical romances, romantic suspense, thrillers, romantic comedy, and novellas. She can be found online at www.susanmaywarren.com, on Facebook at Susan May Warren Fiction, and on Twitter @susanmaywarren.

▼▲
I'm the author/artist and I want to review Troubled Waters #4.
Back
Back