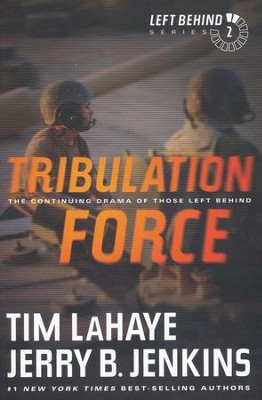 ▼▲
Rayford Steele and Cameron "Buck" Williams find themselves pressed into service for the man they believe could be the Antichrist. Nicolae Carpathia takes over the United Nations, signs a peace treaty with Israel, and begins to lure the nations of earth together to form one global village. As believers band together following the Rapture, their peaceful world is destroyed again when global war erupts.

Read the books that launched a cultural phenomenon!

“This is the most successful Christian fiction series ever.”
—Publishers Weekly

“Call it what you like, the Left Behind series . . . now has a label its creators could have never predicted: blockbuster success.”
—Entertainment

Are you ready for the moment of truth?And that’s just the beginning . . .
of the end of the world.

The 12 books in the series by New York Times best-selling authors Tim LaHaye and Jerry B. Jenkins cover the events of biblical prophecy surrounding the rapture and the seven-year period known as the tribulation that follows.

Tribulation Force: The Continuing Drama of Those Left Behind
It has been nearly two years since the day of the mass disappearances. In one cataclysmic instant, millions all over the globe simply vanished, leaving everything but flesh and bone behind. Global war has erupted, and the Tribulation Force sets a suicidal course that places them in direct opposition to the rise of Antichrist.

▼▲
I'm the author/artist and I want to review Tribulation Force, Left Behind Series #2 (rpkgd).
Back
Back