Skip to main content
CUSTOMER APPRECIATION SALE: Thousands of starry deals through 6/22!
Trade Up: How to Move from Just Making Money to Making a Difference
By: Dean Niewolny
Stock No: WW019580 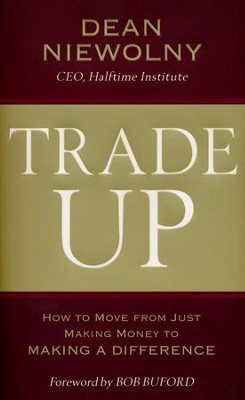 Trade Up: How to Move from Just Making Money to Making a Difference

By: Dean Niewolny
Baker Books / 2017 / Hardcover
4 out of 5 stars for Trade Up: How to Move from Just Making Money to Making a Difference (5 Reviews) Write a Review
In Stock
Stock No: WW019580

What does it take to feel good – and do good – in work? More money? Money falls short, says Dean Niewolny, whose finance career, four houses, boat, plane, and astronomical paycheck still left him restless. Like most achievers, Dean found himself craving work that matters.

So Dean took the hard road to trade up, eventually landing at the helm of Halftime.

Now for almost anyone in any career – just starting, midway, or wrapping up – Dean has the goods. With deep insight from his personal journey, Dean lays out the path to a career with purpose. In Trade Up, you’ll get self-assessment tools and clear steps wrapped in twenty years’ worth of stories, hard-won wisdom, and grace. A person can know what he or she was wired to do – and how to get there.

▼▲
Dean Niewolny spent more than twenty years in executive roles with three of Wall Street's largest financial firms, finishing his career in the financial sector as market manager for Wells Fargo Advisors in Chicago, where he oversaw a $100 million market. In 2010, Dean traded his marketplace career for Halftime to help more people who, like him, wanted to expand their own "first half" success and skills into passion and purpose for meeting human needs and making a significant difference. Dean joined Halftime as managing director and, in 2011, became the CEO. He speaks at events around the world, encouraging business leaders to channel first-half achievement into a second half defined by joy, impact, and balance. He and his wife, Lisa, have two children and live in Texas.

▼▲
I'm the author/artist and I want to review Trade Up: How to Move from Just Making Money to Making a Difference.
Back
Back