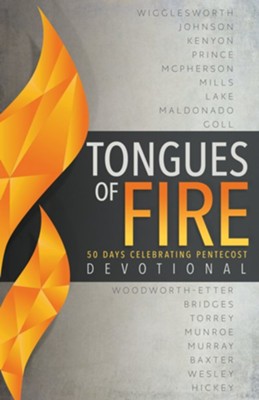 ▼▲
A fifty-day devotional for Pentecost featuring the words and teachings of faithful men and women of God, both classic and contemporary authors, regarding the miraculous power available through God's gift of the Holy Spirit. Includes excerpts from Smith Wigglesworth, John G. Lake, William Seymour, Aimee Semple McPherson, Maria Woodworth-Etter, Andrew Murray, E. W. Kenyon, R. A. Torrey, John Wesley, Mary K. Baxter, Guillermo Maldonado, James Goll, Bill Johnson, and many more. Let this collection of charismatic classics help you to celebrate the wild tongues of fire that signified the coming of Holy Spirit on the day of Pentecost, and be filled anew with the powerful presence of God.

▼▲
Smith Wigglesworth (18591947), known as the Apostle of Faith, had an international evangelistic and healing ministry. A plumber by trade, Wigglesworths life changed dramatically when, at age forty-eight, he was baptized in the Holy Spirit and anointed with power for preaching and healing. Signs and wonders characterized his ministry. His unquenchable faith inspired thousands to receive salvation, healing, and the filling of the Holy Spirit.
Dr. Kynan T. Bridges is the senior pastor of Grace & Peace Global Fellowship in Tampa, Florida. With a profound revelation of the Word of God and a dynamic teaching ministry, Dr. Bridges has revolutionized the lives of many in the body of Christ. Through his practical approach to applying the deep truths of the Word of God, he reveals the authority and identity of the new covenant believer. A highly sought speaker and published author of several books, including Unmasking the Accuser (Whitaker House, 2017), The Power of Prophetic Prayer (Whitaker House, 2016), and Kingdom Authority (Whitaker House, 2015), Dr. Bridges is also a committed husband to Gloria and father of five beautiful children: Ella, Naomi, Isaac, Israel, and Anna.
DR. MYLES MUNROE (19542014) was an international motivational speaker, best-selling author, educator, leadership mentor, and consultant for government and business. He was a popular author of more than forty books, including The Power of Character in Leadership, The Purpose and Power of Authority, The Principles and Benefits of Change, Becoming a Leader, The Fatherhood Principle, and The Principles and Power of Vision. Dr. Munroe was founder and president of Bahamas Faith Ministries International (BFMI), a multidimensional organization headquartered in Nassau, Bahamas. He was chief executive officer and chairman of the board of the International Third World Leaders Associ
R. A. TORREY (18561928) is respected as one of the greatest evangelists of modern times. After his graduation from Yale Divinity School, he was selected by D. L. Moody to become the first dean of the Moody Bible Institute of Chicago. Dr. Torrey spent the years of 19031905 in worldwide revival campaigns, winning thousands of souls to Jesus Christ. He continued worldwide crusades for the next fifteen years while he served as the dean of the Bible Institute of Los Angeles and pastored the Church of the Open Door in that city.
South African pastor and author ANDREW MURRAY (18281917) was an amazingly prolific writer. Murray began writing on the Christian life for his congregation as an extension of his local pastoral work, but he became internationally known for his books, such as With Christ in the School of Prayer and Abide in Christ, that searched mens hearts and brought them into a deeper relationship with Christ. With intense purpose and zeal for the message of the gospel, Murray wrote numerous books even after his retirement at age seventy-eight.
DR. E. W. KENYON (18671948) preached his first sermon at nineteen, founded the Bethel Bible Institute at Spencer, Massachusetts, and served as an evangelist for over twenty years. In 1931, he became a pioneer in Christian radio on the Pacific Coast with his show Kenyons Church of Air, where he earned the moniker The Faith Builder. He also began the New Covenant Baptist Church in Seattle.
Internationally recognized as a Bible scholar and spiritual patriarch, DEREK PRINCE (19152003) taught and ministered on six continents for more than sixty years, imparting Gods revealed truth, praying for the sick and afflicted, and sharing his prophetic insights into world events in the light of Scripture. He is the author of over eighty-five books, six hundred audio teachings, and one hundred video teachings, many of which have been translated and published in more than one hundred languages.

▼▲
I'm the author/artist and I want to review Tongues of Fire Devotional: 50 Days Celebrating Pentecost - eBook.
Back
×
Back
×