Skip to main content
To Treasure an Heiress (The Secrets of the Isles Book #2) - eBook
By: Roseanna M. White
Stock No: WW117072EB 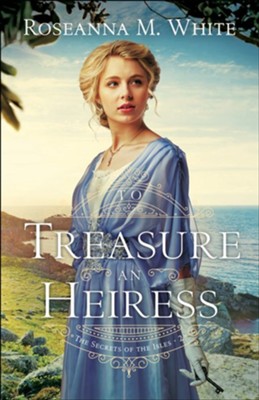 
Beth Tremayne has always been drawn to adventure. During her childhood, she fed that desire by exploring every inch of the Isles of Scilly. Now, after stumbling across an old collection of letters and a map buried on her family's property, she's found more adventure than she ever anticipated in the hunt for pirate treasure. But in order to discover where the clues lead, she must search alongside Lord Sheridan, a man she finds insufferable.

Sheridan has spent years pursuing whatever archaeological interests pique his imagination. And when he discovers that Beth's search connects with one of his far-removed pirate ancestors, he can't help getting involved. Plus, he finds her irresistible, even though she insists he stole a prized possession of hers.

As they work together following different clues and drawing closer to danger, they start to piece together a story of tragic love and piratical adventure. But which treasure will bring the greatest surprise--the one they find in each other or the one just out of their reach?

▼▲
Roseanna M. White is a bestselling, Christy Award-nominated author who has long claimed that words are the air she breathes. When not writing fiction, she's homeschooling her two kids, editing, designing book covers, and pretending her house will clean itself. You can learn more about her and her stories at www.roseannamwhite.com.

▼▲
I'm the author/artist and I want to review To Treasure an Heiress (The Secrets of the Isles Book #2) - eBook.
Back
Back