To Follow Her Heart (The Southold Chronicles Book #3): A Novel - eBook
By: Rebecca DeMarino 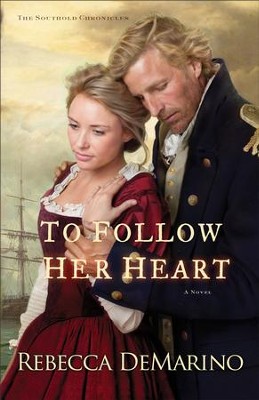 To Follow Her Heart (The Southold Chronicles Book #3): A Novel - eBook

To Follow Her Heart # 3, in the Southhold Chronicles, by Rebecca DeMarino

Patience Terry dreams of settling down with Captain Jeremy Horton until she hears his ship goes down off the coast of Barbados, with no survivors. Memorial service plans begin, but it turns out he had been rescued by a British naval gunship with secret orders to attack New Amsterdam and claim it for the British Crown. Is this the happily ever after she dreamt of when he returns to Southold?

It is 1664 and Patience Terry is devastated to learn that Captain Jeremy Horton's ship has been shipwrecked off the coast of Barbados, with no survivors. She had hoped that Jeremy would someday give up the sea and settle down with her in Southold, Long Island.

Unaware his memorial service is being planned, Jeremy is rescued and aboard a British Naval Gunship with secret orders to attack New Amsterdam and claim it for the British Crown. When he makes his surprise return to Southold--and to an overjoyed Patience--it's not the happily-ever-after his beloved had hoped for.

▼▲
Rebecca DeMarino is a historical romance author and lives in the beautiful Pacific Northwest. She is a member of the American Christian Fiction Writers, Romance Writers of America, The Southold Historical Society, and the New England Historic Genealogical Society. Rebecca is the author of A Place in His Heart, To Capture Her Heart, and To Follow Her Heart, all part of The Southold Chronicles series. Learn more at www.rebeccademarino.com.

▼▲
I'm the author/artist and I want to review To Follow Her Heart (The Southold Chronicles Book #3): A Novel - eBook.
Back
×
Back
×