Skip to main content
SPRING CYBER EVENT STARTS NOW: And it's a really BIG deal! Up to 88% off through 5/24>
Tiny Cedric
By: Sally Lloyd-Jones
Illustrated By: Rowboat Watkins
Stock No: WW770727 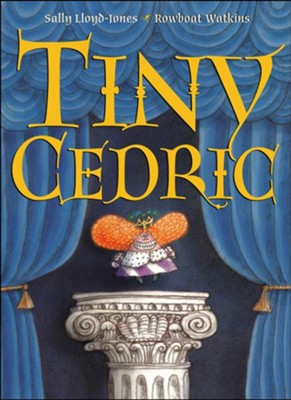 Tiny Cedric, King ME the First has banished anyone taller than him from his palace. Which is everyone, basically.
The only ones left are the babies. And now they’re in charge of the Royal Duties!
How will Cedric cope—especially now that he must kiss boo-boos and read bedtime stories? Will he become a kinder, gentler, BIGGER king?

A hilarious, heartwarming picture book from a New York Times bestselling author and award-winning illustrator about a tiny king who grows into a big-hearted monarch after he banishes almost his entire court from the palace.

Tiny Cedric, King ME the First does not like being small. AT ALL. So he decides to banish anyone taller than him from his palace. Which is everyone, basically. The only ones left are the babies. And now they’re in charge of the Royal Duties!

How will Cedric cope—especially now that he must kiss boo-boos and read bedtime stories? Will he become a kinder, gentler, BIGGER king?

Filled with colorful illustrations and ensuing hi-jinks, this charming picture book is perfect for children of all ages AND sizes!

▼▲
SALLY LLOYD-JONES is the author of the New York Times bestseller How to Be a Baby . . . by Me, the Big Sister. She is also the author of mega-bestselling The Jesus Storybook Bible. Sally's other picture books include, Goldfish on Vacation and Poor Doreen, as well as Look, I Wrote a Book! which The Wall Street Journal called a "charmer." Sally spent her childhood in Africa and England and now lives in NYC. Visit her at sallylloyd-jones.com, and follow @sallylloydjones on Instagram.

ROWBOAT WATKINS is the author/illustrator of Rude Cakes, which earned him The Ezra Jack Keats New Illustrator Honor, among others. The New York Times described his Most Marshmallows as "exquisite," and Pete With No Pants as "huge fun." Rowboat, a former Maurice Sendak Fellow, lives with his family in Brooklyn. Visit him at rowboatwatkins.com.

★ "This original story will have readers cackling through diaper wars, milk and cookies, and the reformation of the grouchiest character since the Grinch." —School Library Journal, starred review

"The fairy tale is well constructed and smartly told, with hidden jokes and layers to appreciate."—Booklist

"A valuable message about isolation and community, delightfully delivered."—Kirkus Reviews

▼▲
I'm the author/artist and I want to review Tiny Cedric.
Back