Skip to main content
THE MEGA CHRISTMAS SALE: Save up to 85% off through 10/19 >
The Tinker's Daughter: A Story Based on the Life of Mary Bunyan
By: Wendy Lawton
Stock No: WW40991 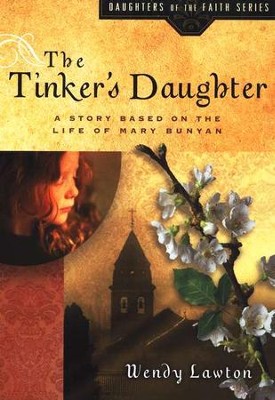 The Tinker's Daughter: A Story Based on the Life of Mary Bunyan

▼▲
John Bunyan, the author of Pilgrim's Progress, mentions only one of his six children in his memoirs--Mary. Born blind in 1650, her story still intrigues us nearly 350 years later. When her father was imprisioned for unlawful preaching, it was 10-year-old Mary who traveled the streets of Bedford each day, bringing soup to her father in prison. Mary developed a fierce determination for independence, after spending years proving that she was not hindered by her blindness. Only when she admited the she needed help did she turn to the Lord; the Source of all strength.

Daughters of the Faith: Ordinary Girls Who Lived Extraordinary Lives.

John Bunyan, author of Pilgrim's Progress, only mentioned one of his children in his memoirs: Mary. Born blind in 17th-century England, she held a special place in her father's heart.

When Mr. Bunyan was arrested for unlawful preaching, young Mary travels the streets of Bedford each day, bringing soup to the prison. She resolves to prove she is independent and not hindered by her blindness. Only when she realizes she needs help does she turn to the Lord, the Source of all strength.

"Warm and inspiring, The Tinker's Daughter abounds with word pictures that bring meaning to the world of blind Mary Bunyan. Sure to touch a family's heart!"  — Lois Walfrid Johnson, author, Adventures of the Northwoods mysteries and Freedom Seekers series

▼▲
I'm the author/artist and I want to review The Tinker's Daughter: A Story Based on the Life of Mary Bunyan.
Back
Back