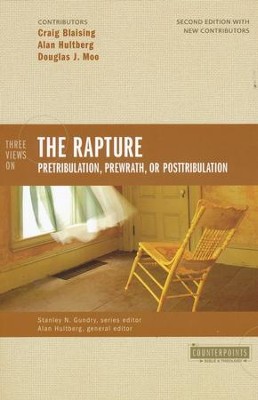 The rapture--or the belief that Jesus' living followers will, at some point, join him forever while others do not--is an important but contested doctrine among evangelicals.

Scholars generally hold one of three perspectives on the timing and circumstances of the rapture, all of which are presented in this important volume of the Counterpoints series, Three Views on the Rapture:

Each author provides a substantive explanation of his position, which is critiqued by the other two authors.

A thorough introduction gives a historical overview of the doctrine of the rapture and its effects on the church. The interactive and fair-minded format of the Counterpoints series allows readers to consider the strengths and weaknesses of each view and draw informed, personal conclusions.

▼▲
I'm the author/artist and I want to review Three Views on the Rapture: Pre-tribulation, Pre-wrath, or Post-tribulation.
Back
Back